Recovery fund could be historic breakthrough for EU 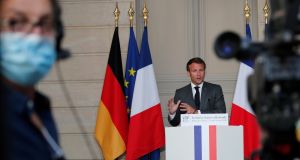 A joint Franco-German plan for a recovery fund to dig Europe out of the economic crash caused by the coronavirus pandemic may constitute a breakthrough for the bloc.

Some greeted it as Europe’s “Hamiltonian moment”. This refers to the landmark in the history of the United States when treasury secretary Alexander Hamilton forged a compromise in which the federal government assumed the debt incurred by states during the War of Independence, paving the way for Washington as we know it.

Under the proposal, the European Commission would borrow €500 billion from financial markets and give it to the member states hardest hit by the pandemic in the form of grants. The money would be paid back by the EU slowly, over the long term.

“Extraordinary circumstances call for extraordinary measures,” German chancellor Angela Merkel said after the plan was announced. “Germany and France are standing up for Europe.”

It’s a deliberate demonstration of commitment to the EU at a time when the bloc has faced challenges, including division, problems with rule of law in Poland and Hungary, and a ruling by the German constitutional court that risked unpicking its legal order.

While still short on detail, its importance as a political statement is clear.

Yet any plan needs to be adopted unanimously by the 27 national leaders of the EU member states, and this is no easy task.

The opposition of the so-called “frugal four” of Austria, Denmark, the Netherlands and Sweden to increasing contributions to the next EU budget has repeatedly held up agreement. They are also fiercely opposed to joint debt.

After France and Germany announced their plan, the youthful chancellor of Austria, Sebastian Kurz, fired off a tweet.

“Just had a good exchange with the Prime Ministers of Denmark, Netherlands and Sweden,” it read. “Our position remains unchanged.”

It was a warning that the quartet stood ready to block any proposals they fear might saddle their citizens with the baggage of weaker economies.

They are increasingly cornered now that Germany has moved.

But the frugals are not the only danger the plan faces. In its aim to give the most help to the countries hardest-hit by the pandemic, it may leave other countries feeling left out in the cold, particularly in eastern Europe.

The European Commission is due to set out its plan for the recovery fund next week following delays as its president, Ursula von der Leyen, tick-tacked with member states to try to build consensus.

The commission welcomed the Franco-German plan, saying it would make agreement within the whole bloc easier. But its own proposal would be different – not a “copy and paste”, said Valdis Dombrovskis.

On the one hand, he indicated the plan would be more conservative, involving a requirement for economic reforms. But on the other hand, it would go even further than the proposal from Paris and Berlin.

“Our ambition is not to increase the financing capacity in the range of hundreds of billions, but rather by a figure exceeding a trillion euro,” in a mixture of grants and loans, Mr Dombrovskis said.

France and Germany have given momentum to efforts for an ambitious deal. And a sense of urgency is driving a willingness to compromise.

“It’s really a do-or-die moment for Europe,” said Luis Garciano, a Spanish economist and Ciudadanos MEP. “I hope . . . it is the moment when Europe makes a big step forward.”