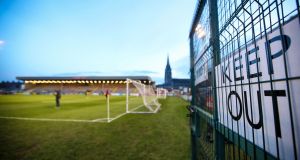 Bohemians were one of the four clubs to return no positive Covid-19 tests. Photograph: Tommy Dickson/Inpho

The FAI have confirmed all of the Covid-19 tests carried out on players and staff at four League of Ireland clubs have returned negative.

The tests were carried out on Monday at defending champions Dundalk, Bohemians, Derry City and Shamrock Rovers.

Players and staff from the four top flight sides will be tested again on Monday June 1st ahead of a return to training a week later on June 8th.

June 8th sees the start of the second phase of the Government’s plan to ease lockdown restrictions within Ireland.

On the news all tests returned negative, the FAI’s interim deputy Niall Quinn said: “This is most welcome news and a very positive step as we work with Government, their agencies and all stakeholders in the game towards a safer return for all of Irish football.

“These negative results are an early boost for everyone in the game but it is only the start. We have to remain vigilant and we again urge all affiliates - clubs, players, supporters and parents - to abide by the Government and HSE guidelines.”

The last League of Ireland fixture took place on Saturday March 7th, before it was postponed due to the coronavirus crisis.