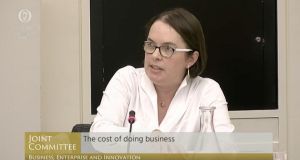 High taxation, poor infrastructure and the housing crisis have all been attributed at an Oireachtas committee as causes for Ireland’s high cost of doing business.

At a meeting of the Oireachtas Committee on Business, Enterprise and Innovation, Ireland’s infrastructure woes, the impact of the housing crisis and tax uncertainty were all pointed to as factors that affect the cost of business negatively.

“Infrastructure needs to be better,” said Peter Rigney of the Irish Congress of Trade Unions, acknowledging comments from Chambers Ireland chief Ian Talbot, who noted the detrimental impact to productivity as a result of employees enduring long commuting times.

Mr Rigney pointed out that with better regional infrastructure, which includes broadband, there would be a greater workforce living outside of Dublin. This would make our capital “more tolerable”, and would steady the cost of housing which was feeding through into wage demands.

Neil McDonnell of the Irish Small and Medium Enterprise Association said housing issues were also making it difficult for some employers to find workers because some people were refusing work that pays more than €35,000 per year on the basis that that salary pushes them off the social housing list.

Taxation was consistently mentioned as one of the key challenges for employers, with Olivia Buckley, communications director at the Irish Tax Institute, reporting that high effective personal tax rates were stymying the sourcing of employees.

Ms Buckley also singled out Ireland’s capital gains tax (CGT) environment, saying that it was the fourth highest in the OECD, “which doesn’t incentivise investment into business”.

Colleague Cora O’Brien also singled out Ireland’s CGT regime, telling the committee that “high tax rates do not equal high yield from tax”. She suggested that the high rate of CGT meant the type of investor coming into Irish businesses was severely restricted.

Ms O’Brien also noted that tax uncertainty was problematic for business owners, while interest rates on underpayment of taxes were far higher than our EU counterparts. “These are penal rates,” she said, referring to the 10 per cent interest payment on payroll and VAT taxes and the 8 per cent interest on other taxes. In the UK, the interest rate on tax underpayment is just above a fifth of what it is in Ireland.

That interest, she noted, must be paid even as an appeal is ongoing. Given that there are currently 4,400 outstanding appeals with revenue, that could lead to a 10-year wait time.