Legislation is struggling to keep up with new world of work, says PwC’s Doone O’Doherty

Highlights from The Irish Times Tax Summit at the Weston Hotel, Dublin. 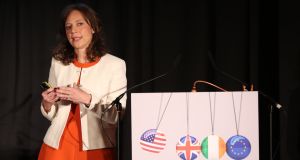 While employment is almost back to pre-crash levels, the composition of the Irish labour market is entirely changed from 2007.

The number of Irish workers on zero-hours contracts has leaped, as has the number of part-time and temporary staff on low pay, all of which have implications for our tax base, a third of which comes from income.

This was the subject of an address to The Irish Times/PwC Tax Summit by PwC’s Doone O’Doherty, who said the Government needed to keep a close eye on three global trends that were transforming the workplace: technology, the gig economy and lifespan.

She said increased automation, in other words the greater use of robots, had resulted in a widening income gap between the top and the bottom, which had prompted calls for a tax on robots, by Bill Gates of all people, and the adoption of a universal income scheme in Finland and the Netherlands.

The gig economy, as evidenced by the rise of companies such as Uber and Deliveroo, was marked by flexible, temporary working arrangements and/or independent contractors.

From a tax perspective, this throws up two big questions: how do we tax these workers and how do we collect the taxes? “Are Deliveroo couriers or Uber drivers employees or self-employed individuals? If they’re employees then the employer holds the taxes and pays that to Revenue; if they’re self-employed individuals, then they’re responsible for paying their own taxes and filing their own tax returns.”

Tax systems were grappling to come to terms with these businesses, she said. In Estonia, the tax authorities recently entered into an agreement with Uber, which sees the company file details of the drivers’ incomes to the tax authorities. Last year, this resulted in a six-fold increase in Uber driver income being reported to the Estonian revenue authorities.

“If I was the Minister, I’d be keeping a watching eye on this space. Employment law and tax law are really struggling to keep up with the pace at which the gig economy is run,” she said.

Another theme was the prospect of a 100-year lifespan, something children born today are likely to enjoy, and what this means for retirement, pensions and tax. These are big issues that need big responses.