Cliff Taylor: EU Commission is unlikely to sign up unless it is happy that the Border is reasonably sound 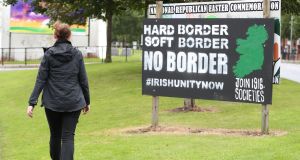 European Commission warned that if Britain leaves the customs union and the single market, as it has said it will, then the concept of a frictionless Border “is not possible.”

When is a border not a border? The new British paper on Brexit and Northern Ireland throws out some ideas for discussion on how the reintroduction of a Border for goods on the island of Ireland could be avoided, or made as “frictionless” as possible.

But there is still no magic solution to the problem that if Britain leaves the EU customs union, some controls become inevitable both at the Border and between Ireland and the UK. London is saying that these could be well nigh invisible, but the European Commission warned in reply that if Britain leaves the customs union and the single market, as it has said it will, then the concept of a frictionless Border “is not possible.”

For Irish businesses this is big deal, but they still have no firm information on which to set their plans and are unlikely to have any for some time to come. One positive is indications that Britain is conscious of Irish companies using the “landbridge” via sea and road to get goods to the Continent and is looking at ways to reduce bureaucracy and delays.

Borders control the movement of two things - people and goods. There is reason for optimism that people will still be able to move freely between Ireland and the UK, both to go about their daily business and also, if they choose, to work. The latest British paper proposes the continuation of the Common Travel Area and other associated rights which allow this to happen.

As much of this predates the EU, there seems no reason why agreement cannot be reached in this area. As well as the social and political links, this is also important economically for Ireland, as the UK has typically been a destination for people who can’t find work here.

One issue which will have to be sorted is how freedom of movement between Ireland and the UK can be squared with new controls. Britain wants to put in place on immigrants coming from other EU countries. Britain will not want to see Ireland used as a “ back door” for people from other countries to avoid quotas restricting the number of immigrants. This may be achievable via the need for people to register when taking up employment or benefits in the UK, rather than via any Border checks.

The movement of goods post-Brexit will be a thornier subject. Britain has said it will leave the customs union when it leaves the EU. This would mean controls on goods trade would be needed between Britain and the EU, including on the island of Ireland, the one land border between the UK and the EU.

The UK paper proposes two possible ways forward. One is for a new customs union agreement between Britain and the EU which could, depending on its terms, reduce or eliminate the need for Border controls. By warning that once Britain leaves the customs union, frictionless trade will be impossible, the EU is setting down a marker that Britain’s plan to be both within and outside a customs union at the same time won’t fly.

Time will tell on this one. But one really big problem is that Britain wants to strike new trade deals with countries like the US. When this happens, how do you control the flow of these goods between Britain and the EU - including the Irish Border? The paper proposes some ways to do this, but acknowledges it would be complicated. And politically the rest of the EU would feel that signing up to this was, to use the phrase de jour, letting Britain have its cake and eat it too.

If this is not possible, then Britain proposes a range of measures which could make the Border as “ frictionless” as possible. This would involve effectively allowing small businesses to operate without many controls, given that most are trading just on the island, with pre-clearance for many bigger treaders reducing bureaucracy and technology used to help track some goods.

One problem is that this could be a charter for smugglers and illegal trade, back to the days when the Border was in place of moving goods by night on unapproved roads. The European Commission will be conscious to maintain the integrity of its single market and customs union and is unlikely to sign up, unless it is happy that the Border is reasonably sound.

An option would be to have customs borders in the Irish Sea, rather than on the island, but the paper rules this out. It points out that the North’s business sold £10.7 billion of goods to the British market last year and £2.7 billion to the Republic. Politically and economically a border in the Irish Sea is this a no go for the North’s unionists and businesses .

The real issue here is that there may simply be no way of squaring the circle of Britain leaving the customs union and avoiding some kind of hardish Border on the island. Some 14 months after Brexit, we are still not much the wiser. Dublin will welcome London’s objection to a hard Border. But the question of how this might be achieved remains unanswered.