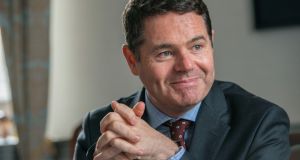 Minister for Finance Paschal Donohoe: there is little he could do, politically, to benefit his own Diageo holding even if he wanted to. Photograph: Brenda Fitzsimons

When Minister for Finance Paschal Donohoe was asked at a briefing in July about whether it was appropriate for him to hold shares in Diageo, given the ongoing debate over alcohol taxation, he seemed perplexed.

His bemusement was understandable, yet the query was still valid.

Donohoe may have properly disclosed his ownership of the shares in the register of interests, and there was no suggestion he would make budgetary decisions to benefit his private, and voluntarily declared, equity holdings. But this wasn’t the point.

The issue was that a minister for finance should be a million miles away from even the remotest appearance of a potential conflict of interest, especially when the alcohol industry is laying siege to his department with a phalanx of lobbyists to get excise on booze cut by 15 per cent.

Donohoe says he is now addressing the matter by transferring his Diageo shares into his wife’s name. She is a former staffer at Diageo, and the shares were originally awarded to her during her employment before a tranche were later put in his name. This will now be reversed.

Donohoe believes he has drawn a line under the matter. Yet there was still a large volume of criticism of the Minister on social media on Monday. It doesn’t matter whether the shares are in his or his wife’s name, the critics say – the appearance of a potential conflict remains because his family benefits from the shares either way.

There is also another dimension to the debate.

Ireland accounts for only a tiny fraction of Guinness-owner Diageo’s £12 billion global sales. Even if Donohoe were to go off the deep end, skull 10 pints of the black stuff on the morning of his budget speech and abolish excise altogether, it still wouldn’t register a whit against Diageo’s share price.

In practice there is little he could do, politically, to benefit his own Diageo holding, even if he wanted to.

Whether or not a senior minister should ever be an investor in an alcohol giant, given the debate over the effects of the abuse of its products on society, is another matter entirely.