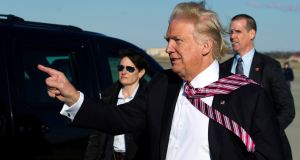 Winds of change: the economic data provided ammunition for Donald Trump’s argument that the US economy is being held back by America’s external deficit. Photograph: Jose Luis Magana/AP Photo

The US recorded its slowest economic growth in five years in 2016 as poor trade data dragged on the economy, prompting Republicans and advisers to Donald Trump to redouble calls for lower taxes and a hard line on trade.

The numbers provided ammunition for Mr Trump and his argument that the US economy is being held back by America’s external deficit, though economists said they were likely to have little impact on Federal Reserve policy.

Dan DiMicco, the former Nucor Steel chief executive who led Mr Trump’s trade transition team, said the new economic numbers bolstered the president’s case for a harder line in international trade policy. “It’s another example in a long line of 20 years of examples of where the trade deficit reduces growth,” he said. “If you look at just what the deficit did this quarter, imagine what it has done all those years.”

In the final quarter of 2016, growth slowed to an annual pace of 1.9 per cent from the 3.5 per cent seen in the third quarter. Patchy export data and higher imports subtracted 1.7 percentage points from output in the final three months of the year, with exports depressed in part by lower soyabean sales following a third-quarter surge.

The US trade deficit in goods and services rose to $45.2 billion in November, as exports in goods fell, imports of goods rose and an increase in the surplus in services failed to keep up.

Most economists argue that the trade deficit is the wrong metric to gauge the US economy’s performance, or for a president to target. That is particularly true of bilateral deficits, they say, likening them to the deficit a consumer might have with his barber or supermarket.

The risk, critics argue, is that Mr Trump’s protectionism could drag the US into a trade war that would damage the US and global economies.

Consumer spending, the main driver of the US economy, continued at a solid 2.5 per cent annual clip, shy of the third-quarter pace but in line with the average rate set over the past two years.