Australian firms looking to Ireland as EU base, says IDA 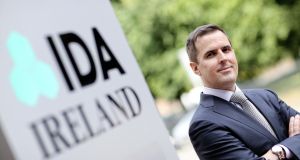 The IDA has received significant interest from companies in Australia who are considering Ireland as an entry point into Europe following the UK’s decision to leave the EU.

At the inaugural Australia Day lunch, hosted in Croke Park by the local chapter of the Irish Australian Chamber of Commerce, IDA chief executive Martin Shanahan noted that 45 Australian companies had already invested in Ireland, creating a combined 3,000-plus jobs.

Three investments were announced last year: SiteMinder, which announced 100 jobs for Galway; Nexvet in Tullamore; and CXC Global setting up its European headquarters in Dublin.

Mr Shanahan said a key strategic objective of the IDA was to grow investment from the Asia Pacific region. “Within that, Australia is performing and that’s why we’ve increased our presence down there,” he said.

“We are extremely optimistic about our relationship with Australia. We see investment in the pipeline. We will foster those relationships and we will be an active part of this chamber.”

Speaking to The Irish Times after the event, Senan Ryan, the IDA’s business development executive for growth markets, said there had been interest from Australian companies post-Brexit.

This interest is coming from a range of sectors, including financial services, technology, life sciences and engineering, across a range of functions including support services, manufacturing supply chain, and sales and marketing.

“Companies are currently in research mode,” he said. “We’re seeing queries from a diverse range of sectors, not just financial services.”

Mr Ryan noted the IDA’s stated strategy out to 2019 of doubling the investment and jobs coming from Asia Pacific, including Australia. The IDA’s target for Australia was to “significantly increase” investment into Ireland.

He said the IDA was seeing “traction” from the agri-tech and travel tech sectors, averaging 40-50 new jobs per project.

“They’re growing industries in Australia and New Zealand, and there’s a natural fit for those in Ireland.”

Richard Andrews, Australia’s ambassador to Ireland, said the distance between the two countries meant that “we’ve often neglected to understand the true significance and possibilities” of the relationship.