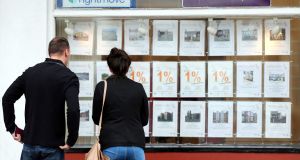 In the final quarter of 2016, approvals for house purchase grew by 30 per cent year on year in volume terms and by 44 per cent in value. Photograph: Peter Byrne/PA

The number of mortgages approved in Ireland rose by 29 per cent in the 12 months to December, figures from the Banking and Payments Federation (BPFI) of Ireland reveal.

With the average loan size increasing by 6 per cent, this led to a 36 per cent growth rate in the value of mortgage approvals.

Nonetheless, the rate of growth was lower than that seen in November, which recorded a 61 per cent jump in approvals.

According to Dermot O’Leary of Goodbody, November may have been influenced by those who were waiting on clarity around housing measures introduced in Budget 2016 in October before seeking mortgage approval.

In the final quarter of 2016, approvals for house purchase grew by 30 per cent year on year in volume terms and by 44 per cent in value.

Similar growth was witnessed in the first-time buyer (up 45 per cent year on year by value) and mover-purchaser categories (up 43 per cent by value).

Approvals for buy-to-let mortgages grew by 24 per cent in value terms, but remain a very small proportion of total lending, comprising just 3 per cent of the total in 2016.