Cantillon: No mention of Trump the Elephant at US chamber briefing 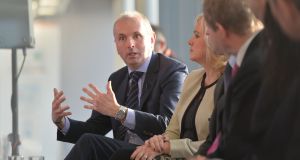 Microsoft’s James O’Connor, who is the new president of the American Chamber of Commerce Ireland. The chamber represents more than 700 companies that employ 150,000 people in Ireland. Photograph: Alan Betson

“Elephant in the room” is an overused phrase these days, but a particularly big one turned up in the American Chamber of Commerce Ireland offices yesterday.

The chamber, which represents 700-plus US companies that employ 150,000 people here, held its annual press briefing, where the new president, Microsoft’s James O’Connor, updated reporters on relations between the Republic and the country that is its biggest overseas investor.

O’Connor’s address covered all the usual figures, which indicate that the relationship has never been healthier, and outlined what the chamber believes the State should do to ensure that it keeps existing investors and attracts new ones.

However, O’Connor made no mention at all of Donald Trump. He only indirectly referred to the new US president’s policies by quoting the administration’s commerce secretary – and former Bank of Ireland shareholder – Wilbur Ross, who told his senate hearing that the new regime would not oppose “sensible trade”.

Nevertheless, we have known for some time that Trump wants to cut taxes to encourage US companies to “come back” and discourage them from setting up overseas bases in the first place. We also know that shortly before the vote that actually elected him, Trump named the Republic as one of those countries that he saw as competing for US investment.

Given all of that, it is strange that O’Connor and his board members, who presumably had some kind of input into his address, chose to avoid any reference to Trump at all. The American Chamber does a lot of lobbying and so has be diplomatic, but this time it seems to have fallen back on the Irish political “strategy” of studiously ignoring elephants in the room in the hope that they will go away. The problem is that they never do.