As the US and UK pursue unrealistic trade goals, Ireland needs to take a different path

President Donald Trump says the US is renewing its "deep bond" with Britain during a joint news conference with British prime minister Theresa May in Washington. Video: Reuters 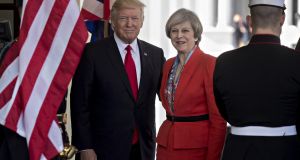 US president Donald Trump, stands with Theresa May, UK prime minister, while arriving at the West Wing of the White House in Washington, DC. Photograph: Andrew Harrer/Bloomberg

Theresa May’s unedifying rush to embrace Donald Trump exposes several paradoxes about economic policy, the most prominent being their respective views on free trade: the British prime minister is in favour but the US president is implacably opposed.

Just how this one plays out will be of critical strategic interest to Ireland, arguably one of the most globalised countries in the world.

Trump’s mumbled threat to impose a 20 per cent tariff on Mexican imports is one piece of a larger jigsaw that includes pulling out of the Trans-Pacific Partnership (TPP), renegotiating the North American Free Trade Agreement (Nafta) and a determination to pick a trade fight with China.

Theresa May seems convinced (but I doubt if this is sincere) that a series of multilateral free trade agreements between the UK and the rest of the world will more than make up for exiting both the EU’s single market and customs union.

Free trade is one of those peculiar things that provokes an almost religious fervour amongst its defenders and opponents. One of the problems facing Trump is the deeply held belief of most Republican senators and congressmen that the virtues of free trade are up there with the right to own a semi-automatic assault rifle.

Paul Krugman won his Nobel Prize for work on international trade. I guess he is the epitome of the experts that we now deride. But even a superficial acquaintance with his work – and that of more modern researchers in the field – leads to clear conclusions. Trade policy is complicated, trade theory equally so and the available data does not lead to easy, universally applicable lessons about what does and does not work. Beware politicians who claim otherwise.

Economists generally share the Republican and Theresa May view of the world. But their opinions are often less fervent and more nuanced: there are downsides to free trade but academics don’t like to talk about them because of the way these caveats get hijacked by Trump-style anti-trade populists.

One area of controversy is over so-called distributional effects: free trade does create winners, but there are also losers. The overall economic consequences are usually thought to be positive (with debate over the size) but economists have generally downplayed the harmful effects. Most obviously, the loss of jobs in coal, steel and other manufacturing activities are argued to be caused by free trade.

Dani Rodrik, a Harvard professor, has for years been waging a lonely battle warning about the dangers of ignoring the losers from free trade. He is at pains never to give succour to crude protectionists but does occasionally run the risk of falling into that trap. He recently looked at the accumulated evidence of the winners and losers from Nafta, taking issue with Brad DeLong, a professor at University of California, Berkeley, who Rodrik thinks exaggerates the gains and minimises the losses.

Both economists actually agree about much: the US economy has benefited but jobs have been lost. Most importantly, they both think that anything Trump does to try to bring jobs back from Mexico (or anywhere else for that matter) is doomed to failure. Their disagreements revolve around how much to worry about the losers from free trade.

At the heart of all of this is a collapse in manufacturing employment. In the 1950s, almost one in three US workers were in manufacturing jobs. Now it is fewer than one in 11. Similar trends have been seen in many countries, including the UK and even Germany. What caused this?

He accuses Rodrik of being an “enabler” of that blame game. Strong stuff, but it neatly illustrated the tenor of the debate and the issues that are at stake.

Whatever Trump does, manufacturing jobs are not coming back to the United States. If May does turn Britain into a bastion of free trade, what is left of manufacturing will, ironically and tragically for those concerned, probably disappear.

Ireland’s exposure to all of this is acute and obvious. Without much influence on either of these major trading partners, we have to hope for the best and prepare for the worst.

That means preparing for less trade with the UK and the US and figuring out how to boost exports to everyone else.