US sanctions Chinese and Russian firms for aiding North Korea 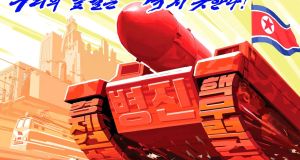 A North Korean propaganda poster attacking the US and its allies

The US has imposed sanctions on 16 Chinese and Russian companies and individuals accused of helping North Korea develop missiles and nuclear weapons, as the Trump administration ratchets up pressure on Pyongyang following the regime’s recent intercontinental ballistic missile tests.

The US Treasury imposed the sanctions on 10 companies and six individuals that help North Korea develop weapons by providing raw materials or conducting business that helped Pyongyang secure funding for its nuclear and weapons programmes. The measures are intended to encourage China to put more pressure on Kim Jong-un, the North Korean leader, to rein in his weapons programmes.

“It is unacceptable for individuals and companies in China, Russia and elsewhere to enable North Korea to generate income used to develop weapons of mass destruction and destabilise the region,” said Steven Mnuchin, the US Treasury secretary. “We are taking actions consistent with UN sanctions to show that there are consequences for defying sanctions and providing support to North Korea, and to deter this activity in the future.”

Mr Mnuchin said the US would continue to put pressure on North Korea by isolating companies that aided the regime in Pyongyang from the US financial system.

The new measures come just weeks after the UN Security Council passed another resolution imposing tougher sanctions on North Korea after the regime conducted its first tests of long-range intercontinental missiles that are estimated to have the range to reach the US.

The sanctions on the Chinese companies follow a similar action in June when the US sanctioned Bank of Dangong, a Chinese financial institution based near the border with North Korea, which it accused of helping Pyongyang engage in money-laundering.