Cantillon: Being on wrong end of a Trump rant hardly major cause of concern 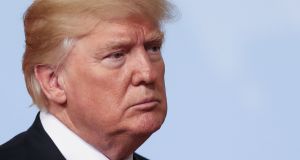 Donald Trump: “Some of the folks that will leave, they’re leaving out of embarrassment because they make their products outside” the US, the president told reporters.” Photograph: Matt Cardy/PA Wire

It’s difficult to comprehend how Ireland could have surfaced, even briefly, in the now toxic cauldron of US race relations, but Donald Trump’s compulsion to counterattack when under fire can lead to unexpected turns in the media cycle.

This time the focus of his ire is corporate America and its seemingly unpatriotic policy of locating operations offshore at the expense of US jobs, an inevitable aspect of globalisation, you might think, but nonetheless a touchstone for Trump’s besieged white underclass.

When faced with a growing list of CEOs resigning from his White House jobs panel, in protest at his equivocating response to white supremacist violence, Trump deployed his favoured bait-and-switch technique for dealing with controversy, first lambasting the company bosses as “grandstanders” and then criticising them for sacrificing middle America in pursuit of profit.

“Some of the folks that will leave, they’re leaving out of embarrassment because they make their products outside” the US, he told reporters, before going on to bemoan the fact that US jobs were being lost to other countries because of the actions of these companies, name-checking Ireland along the way.

Being on the wrong side of one of Trump’s tirades is perhaps not as reputationally damaging as it might have been if the president didn’t have such reputation for grandstanding himself.

As a result, it’s unlikely we’re going to see the same level of diplomatic scrambling here that followed Ireland’s categorisation as a tax haven at a US senate committee hearing into Apple’s tax arrangements in 2013.

Back then, we were mired in recession and seemingly in the crosshairs of a global backlash against corporate tax avoidance. Both those tides have receded since.

The IDA’s response to Trump’s singling out of Ireland was relaxed in tone, noting only that locating abroad was a commercial imperative for selling into certain markets.

If Trump is serious about onshoring US investment, it will be through tax reform, one of the areas his administration and big business seem most aligned on. And an aggressive cut in US corporation tax could choke off investment in Ireland’s pharma and medtech sectors as it would make it more favourable for US firms to manufacture at home.