US heading for trillion-dollar annual budget deficits from 2020 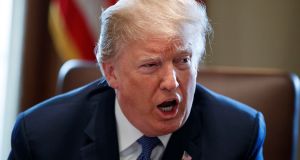 The US is heading for trillion-dollar annual budget deficits from 2020 as Republican-led tax cuts and higher public spending strain the nation’s finances, according to a top budget watchdog.

The Congressional Budget Office (CBO) said it expects the budget deficit to swell to $804 billion this year, some $242billion more than it projected last summer. The gap between spending and receipts will expand to just over $1 trillion by 2020, also over $200 billion higher than previously predicted, with the deficit set to steadily grow over the course of that decade.

The findings came in the CBO’s first comprehensive fiscal and economic outlook since the tax and spending legislation enacted by Congress in recent months. The surge in the deficit follows the Republicans’ December legislation cutting taxes by $1.5 trillion over 10 years, followed by a bill passed in March that lifts ceilings on discretionary spending over two years.

The CBO’s outlook shows the fiscal stimulus will sharply lift growth this year, before the expansion loses momentum as the Federal Reserve lifts interest rates.

Given the rising deficits, the CBO now predicts that government debt held by the public will swell to nearly 100 per cent of US gross domestic product at the end of the 2020s. That would be the highest levels since 1946 and more than twice the average over the past five decades.

“Such high and rising debt would have serious negative consequences for the budget and the nation,” the CBO said in its Budget and Economic Outlook, warning that it increased the likelihood of a “fiscal crisis” in the US.

President Donald Trump expressed unhappiness when signing Congress’s $1.3 trillion spending bill, initially suggesting he might veto it before changing his mind. The last time the US recorded deficits of more than $1 trillion was 2012, which was in the aftermath of the recession.