Automation alarm, the ‘right to disconnect’ and why Spotify isn’t normal

Planet Business: This week we’re in a New York state of mind 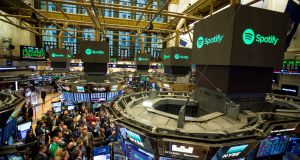 In numbers: Some robots are coming

Percentage of jobs that are “highly automatable” (meaning there is said to be a 70 per cent or greater chance that they will be lost to automation) in Organisation for Economic Co-operation and Development (OECD) countries, the body said.

Percentage of US jobs said to be threatened by automation in a previous and rather more alarming study by University of Oxford academics.

Even the OECD’s lower estimate equates to this number of jobs across the OECD’s 32 developed economies that could be the preserve of machines in the years to come.

Image of the week: Ringing no bells

Spotify’s logo adorned the screens of the New York Stock Exchange (NYSE) trading floor on Tuesday as the company made its trading debut in an unusual direct listing, but the pictures taken to mark the event are notable for what they are not – an image of Spotify founder and chief executive Daniel Ek ringing Wall Street’s opening bell. “Normally, companies ring bells,” Ek wrote in a blog post. “Normally, companies spend their day doing interviews on the trading floor touting why their stock is a good investment. Normally, companies don’t pursue a direct listing.” But Spotify has “never been a normal kind of company”. It’s not about the one-hit-wonder, “initial splash”, but building and planning for the long term, Ek added. Here’s hoping there’s no difficult second album coming its way.

The lexicon: Right to disconnect

It is known as the “Le droit à la déconnexion” in France, where trade unions have led a bid to prevent employees being kept subject to “a kind of electronic leash – like a dog”, as one MP put it. Now a similar push is taking place in New York, where city politician Rafael Espinal has introduced a “right to disconnect” Bill that would establish the rights of employees to stop answering work-related emails and texts from their employers during non-work hours. Espinal, inspired by France, wants workers to be able to “take control of their personal lives” and “draw a line between their work hours and their personal hours” without fear of retaliation. Not only is this an employee-rights issue, but it’s actually better for companies in the long term, as that “always-on” feeling inevitably leads to fatigue and burnout and actually hurts productivity in the most stupid of ways. New York: the city where workers would quite like to sleep some time, thanks.

Getting to know: Scott Stringer

Let’s stay in New York a little longer and consider the intervention in the Facebook data scandal of city comptroller Scott Stringer. As the overseer of the city’s pension fund, Stringer is responsible for an investment of almost $1 billion in Facebook and in this capacity he has told CNBC that the tech giant’s chief executive Mark Zuckerberg should quit his other role as chairman of the eighth largest company in the world. Stringer believes it would both help democracy and make Facebook stronger if it had more independent oversight of its board, so he’s also calling for three new independent directors on behalf of the firefighters, police officers and teachers of the city. “They have not comported themselves in a way that I think makes people feel good,” says Stringer. It could be “a slow slog”, but, with Zuckerberg due to testify before Congress next Wednesday, the issue of Facebook’s corporate governance isn’t going anywhere.

It’s all fun and games until someone starts a trade war. After the White House announced a second wave of tariffs on $50 billion worth of Chinese imports – hitting some 1,300 products – the Chinese responded with a lengthy list of proposed tariffs of its own and the line from their embassy to the US “as the Chinese saying goes, it is only polite to reciprocate”. So which products have been caught up in this lose-lose, tit-for-tat? Only all the good stuff.

1. Television sets: Chinese television set imports to the US will be among the items subject to a 25 per cent levy under Donald Trump’s latest cunning plan.

2. Whisky: The spirit appeared on China’s retaliation list, which may well leave US drinks producers feeling like getting very drunk indeed.

3. Beef: The serious beef between the US and China has seen the latter threaten tariffs on all the fresh, cold, frozen and boneless stuff.

4. Rocket launchers, flame-throwers and shotguns: The US is good for these, thanks.

5. Uranium: Its tariff list suggests the White House prefers its depleted uranium compounds to be of the local variety.