Shares in Russian companies plummet on US sanction fears 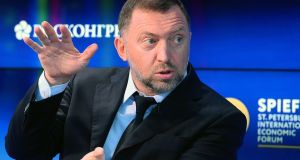 Companies owned by Russian billionaire Oleg Deripaska (above) have warned that US sanctions against his Russian aluminium and energy empire would have a “materially adverse impact” on future business prospects and could result in technical credit defaults. Photograph: Olga Maltseva/AFP/Getty Images

Companies owned by Russian billionaire Oleg Deripaska warned that US sanctions against his Russian aluminium and energy empire would have a “materially adverse impact” on future business prospects and could result in technical credit defaults.

Investors wiped off half the value of Hong Kong-listed aluminium producer Rusal and almost a third from London-listed holding company EN+ on Monday in reaction to the sanctions.

Russia’s broader market also sank, with the main blue-chip index trading 9.6 per cent lower, as major companies such as Sberbank and Norilsk Nickel fell sharply despite not being affected by the sanctions, which also hit six other oligarchs and 17 government officials.

Shares in EN+ had already fallen 22 per cent on Friday after Washington imposed sanctions against Mr Deripaska and his businesses in a targeted move against the oligarch for “advancing Russia’s malign activities”.

The sanctions are designed to stop Mr Deripaska and associated companies from doing business in US dollars and cut him off from any dealings with US citizens. A new provision expands those rules to transactions involving non-Americans, in a major blow to his operations.

Russian prime minister Dmitry Medvedev said on Monday that he would instruct the government to develop initiatives to support companies affected by the sanctions and also consider retaliatory measures in response.

Rusal produces almost 6 per cent of the world’s aluminium. The metal jumped in price on Monday after lawyers and traders said that many non-US customers would also be wary of buying from the company because of the wide reach of the sanctions.

Both Rusal and EN+ said in separate statements on Monday that their “initial assessment is that it is highly likely that the impact may be materially adverse to the business and prospects of the group”. EN+ owns a controlling stake in Rusal and the energy company that powers its aluminium smelters.

“The biggest blow was taken by public companies controlled by Oleg Deripaska,” Moscow brokerage Aton wrote in a briefing note, adding that the market was looking for “possible actions to minimise” the damage.

“We expect the risk of secondary sanctions will impact well beyond just US imports, and Rusal material will indeed be shunned by many non-US consumers and their financing banks,” said Oliver Nugent, a commodities strategist at ING.

EN+, which only listed in London in November having raised $1 billion from City investors despite fears over the potential of further sanctions being imposed on Russia, said it would focus on maintaining its operations and ensuring it “abides by all applicable laws and regulations”.

“The company intends to continue to fulfil its existing commitments whilst seeking solutions (which may involve adjustments to its existing agreements and arrangements in accordance with legal and regulatory requirements) to address the impact of the [sanctions],” it added.

Separately, it announced that a programme allowing US holders of its GDRs to convert them into full shares had been closed with immediate effect, and that Dominique Fraisse, a Natixis banker who was one of the companies’ independent directors, had resigned from the board. EN+ and Rusal also warned that publication of their 2017 annual reports could be delayed. – Copyright The Financial Times Limited 2018

1 Ireland faces 'deep downturn' this year and may not rebound until 2024 if there is a second wave
2 ‘The rental situation stops me moving back home’
3 John FitzGerald: Civil Service expertise key to Government policy
4 Why are markets booming when a crash is on the way?
5 Major works at Rosslare Europort after €30m investment from Irish Rail
6 Dublin consultancy Pathfinder set for expansion after buyout by Sia Partners
7 How much do Irish people earn? And what will Covid-19 do to our wages?
8 Ryanair pilots accept 20% pay cut, airline says
9 Red tape logjam creates fear for Irish timber supply
10 Preliminary deal to allow Irish goods travel through UK reached - reports
Real news has value SUBSCRIBE