Premium of up to €3,360 a year for being adjacent to rail lines in Dublin 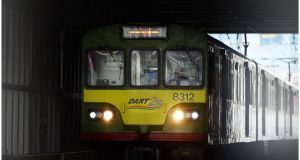 Daft’s research shows that the Dart, which runs along Dublin’s coastline, continues to attract a greater premium than the Luas.

The research also shows that the Dart, which runs along the capital’s coastline, continues to attract a greater premium than the Luas, despite the recent extension to the green line.

For example, commuters living near the Dart are now paying €1,810 on average each month – while the average rent by a red Luas stop is now €1,652, and €1,797 for those close to the green Luas line.

Indeed commuters who opt to live by the Dart along the coast on the southside of the city will pay considerably more for their abode. On the Dart, Sandymount is the most expensive station to live close to, with an average rent for a one- or two-bed apartment of €2,282 – more than double the average rent at the cheapest rail stop, Cheeverstown Luas, in Citywest.

On the Luas, the most expensive stop on the red line is Spencer Dock, with average rents of €2,260 in the adjacent Spencer Dock development or over the bridge in Grand Canal, followed by the nearby Mayor Square/NCI (€2,094).

On the green line, which now travels from Broombridge to Bride’s Glen, the priciest area is that close to the Charlemont stop on the canal, with an average rent of €2,091, followed by Central Park (€2,031) out in Leopardstown, which is now home to several new upmarket apartment schemes.

When it comes to the newly-opened cross-city line, properties close to the Dominick stop near the Rotunda came out on top, with average monthly rents of €1,894.

Ronan Lyons, an economist at Trinity College Dublin, said price growth associated with the new extension has already been factored in, with rents up 3 per cent along the extension in the first quarter of the year.

“Based on this data, it appears that the rental market on the Luas green line has now adjusted to the new service,” he said.

The cheapest areas on the Luas are all on the red line, and after Cheeverstown include Belgard in Tallaght (€1,182) and Cookstown (€1,311).