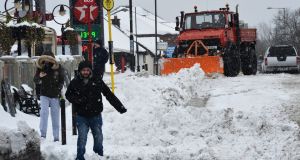 The Beast from the East weighed on the euro zone services sector. Photograph: Alan Betson

Businesses across the euro zone ended the first quarter with their weakest expansion since the start of 2017 as bad weather and a strong currency combined to curb growth in new orders, a business survey showed on Thursday.

It was a similar story in Britain, where a sister survey said the Siberian weather system meteorologists called “the Beast from the East” weighed on services, which expanded at the slowest rate since just after the vote to leave the European Union in June 2016.

Survey compiler IHS Markit said the PMIs pointed to a solid first quarter growth rate of 0.6 per cent in the euro zone, but only half that in Britain, which is due to leave the EU in just under a year’s time. But the ECB will probably decide this summer to slash its bond purchases if things develop as expected, policymaker Ewald Nowotny said last week.

The BoE is widely expected to raise interest rates next month for only the second time since the global financial crisis a decade ago.

“The ECB is pretty much set on its course anyway. The Bank of England is a little more interesting in the sense that the rate decision is a bit more imminent,” said Peter Dixon at Commerzbank. “But the general perception is that this all appears to be more of a weather-related effect and as a consequence we can look through.”

The BoE sees British inflation as running too high. Even though it is below target in the euro zone, the ECB is looking to wind down its huge stimulus programme in coming months. Euro zone inflation rose to 1.4 per cent as anticipated last month, preliminary official data showed on Wednesday, still some distance from the ECB’s 2 per cent target ceiling.

In Britain, where sterling’s fall since the Brexit vote has driven inflation up, prices rose a slower than expected 2.7 per cent annually in February - though considerably above the central bank’s 2 per cent target. The BoE kept interest rates steady last month but two policymakers unexpectedly voted for a hike, reinforcing the view among economists that borrowing costs will rise in May.

IHS Markit’s euro zone Final Composite Purchasing Managers’ Index, seen as a good overall indicator of growth, fell to 55.2 in March from February’s 57.1, and revised down slightly from the flash estimate of 55.3. That was the sharpest one-month drop in almost six years, but it remains well above the 50 mark separating growth from contraction.

Although growth remained strong and broad-based - with output expanding in every country covered by the survey - signs of a slowdown were also widespread, with growth in the region’s big four economies as well as Ireland all moderating.

IHS Markit/CIPS British services PMI tumbled to 51.7 in March from February’s reading of 54.5, its lowest reading since July 2016 and a bigger fall than any economist had forecast in a Reuters poll. Reports earlier this week showed Britain’s construction PMI dropped sharply in March, although manufacturing held up better.

“At face value, the latest UK services PMI looks very concerning ... but it seems that ‘the Beast from the East’ played a big role in this miss,” noted James Smith at ING. “In reality, this means that policymakers will likely choose to look through this latest data when they meet next in May.”

Reuters polls last month predicted economic expansion of 0.6 per cent in the euro zone and 0.4 per cent in Britain. In January, the region’s PMI was at its highest since June 2006 but the Reuters poll said growth had already peaked. The euro has gained over 2 per cent against the dollar in the last three months, making the region’s exports more expensive, while several blasts of cold weather in Europe have also hit activity.

“We are seeing some weakness in the domestic economy as well; notably some of the German numbers have been a bit softer of late. At the margin, the stronger euro is not helping,” Commerzbank’s Dixon said.

A sub-index measuring new orders, which includes trade within the euro area, fell to a 14-month low of 55.0 from 56.3. Mirroring a slump in the manufacturing PMI released on Tuesday, the index covering the region’s dominant service industry declined to a seven-month low of 54.9 from 56.2, just shy of the 55.0 flash reading. – Reuters