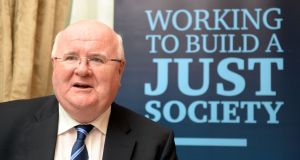 Seán Healy: “We are a low-revenue economy, yet we are one of the richest countries in the world,” the Social Justice Ireland director says. Photograph: Eric Luke

The Government needs to raise an additional €3 billion in taxes to fund a fair and equal society, according to advocacy group Social Justice Ireland.

In a book entitled Social Justice Matters: 2018 guide to a fairer society, the organisation argues that the Republic needs to increase and broaden its tax base to keep exchequer funds safe through uncertain economic times, fund decent public services and upgrade ageing infrastructure.

While acknowledging that raising taxes is “politically toxic”, it suggests money can be raised from a range of measures such as a minimum effective corporate tax rate of 10 per cent, a financial transactions tax, eco-taxes, and increasing the minimum effective tax rates on high earners.

Controversially, it advocates negotiating an EU-wide agreement on a minimum corporate tax rate for the bloc, suggesting a rate of 17.5 per cent would be fair.

Ireland’s 12.5 per cent corporation tax rate, which is the lowest in the OECD, has been closely guarded by successive administrations and is seen as a cornerstone of the State’s industrial policy. However, with other countries now following suit by cutting their own rates, many analysts believe a “race to the bottom” will ultimately see all nations lose out.

Social Justice Ireland also wants corporations based in Ireland to pay a minimum effective corporate tax rate of 10 per cent and as an interim measure, it called on the Government to introduce a 6 per cent rate in the next budget.

According to the latest Comptroller and Auditor General (C&AG) report, some 13 of Ireland’s top 100 companies pay an effective rate of tax of just 1 per cent. The low rate, which is significantly below the State’s statutory rate, reflects the impact of various tax credits and reliefs available to companies operating in the State.

On income tax, Social Justice Ireland wants the Government to increase the minimum effective tax rates on very high earners, those with incomes in excess of €125,000, so that these rates are consistent with the levels faced by PAYE workers.

It also advocates imposing charges so that those who construct or purchase second homes pay the full infrastructural costs of these dwellings and restoring the 80 per cent windfall tax on the profits generated from all land rezonings.

The organisation suggests joining with other EU member states to adopt a financial transactions tax, which Ireland and the UK have vehemently opposed.

“We want to chart a course to a better Ireland – that is what this book is about. At the foundation of that is how we raise taxes and how much tax we raise,” Seán Healy, chief executive of Social Justice Ireland, said.

“ We are a low-revenue economy, yet we are one of the richest countries in the world. It should be a priority to find those additional resources, not to squander the resources we have,” he said.