Planet Business: A week in which things went quite well for Apple, at least 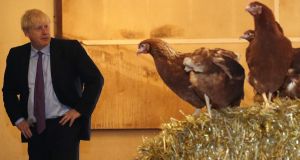 Image of the week: Brexit chicken

The itinerary for Boris Johnson’s boo-tastic tour of the parts of the UK that really don’t like him was a busy one. When he wasn’t shaking hands with a weary Nicola Sturgeon, having a private meeting with Arlene Foster or wearing a jacket handily tagged “prime minister”, Johnson was hanging out on Shervington Farm in Newport, south Wales.

Eschewing the traditional sheep farm picture, Johnson instead posed with cabinet colleagues Michael Gove, Jacob Rees-Mogg, Dominic Raab. sorry, no, these are some chickens. It’s another brave picture choice, given the spectre of chlorinated chicken imported from the US has become symbolic of post-Brexit trade pain, while these particular chickens are at risk of being saddled with tariffs.

All in all, it’s been another stunningly incoherent week, with Johnson declaring the odds of no deal as being a million to one against, even as Gove insisted the UK government was now working on the assumption of no deal. Put the chickens in charge?

$8 billion Writedown taken by consumer goods company Procter & Gamble on its shaving brand Gillette due to currency fluctuations, competition and a shrinking market.

11 In 11 out of the last 12 quarters, net sales have declined for P&G’s grooming business, which includes Gillette, in part because men are simply shaving less often.

$57 billion Sum that P&G paid in 2005 for the Gillette brand, which is 118 years old. Over the past decade, there’s been a rash of new market entrants disrupting the business of razors.

Getting to know: Kyle Giersdorf

Kyle Giersdorf, aka Bugha, is the 16-year-old American who has just won the World Cup – the Fortnite World Cup. This might seem a niche endeavour were it not for the fact that his game efforts have been rewarded with a record-breaking e-sports prize of $3 million (€2.7 million), though he says all he wants is “a new desk and maybe a desk for my trophy”.

Some 40 million players tried to qualify for the 100-player strong finals, which were held at the Arthur Ashe Stadium in Flushing Meadow, New York. The venue is best known for staging the US Open tennis major every autumn (where the singles’ champions win $3.85 million for their trouble), but for now it’s game, set, match and $3 million to Mr Giersdorf.

Apple’s quarterly earnings beat investors’ expectations on Tuesday, but what exactly did Apple-watchers learn from what the company said?

1. Phone issues The iPhone represented less than half of the tech giant’s revenues in the second quarter, with sales down 12 per cent.

2. Wearables are in fashion Revenues from wearables like Apple Watch and other accessories like AirPods increased almost 50 per cent as the company’s diversification mission continued.

3. China wasn’t terrible After a bit of a plunge earlier this year, there was a more modest dip in Apple’s Chinese sales this time.

1 Guinness brings out a non-alcoholic version of the black stuff
2 How long can Government afford to keep State pension age at 66?
3 Don’t worry about the deficit – the lockdown risk is to jobs
4 Google's incredible power is the result of decades of regulatory failure
5 Half of businesses plan 2021 pay freeze amid economic uncertainty
6 How much will a Covid-19 vaccine cost?
7 Irish start-up Wayflyer raises €7.8m in seed funding
8 Frank Fitzgibbon stepping down as Sunday Times editor
9 Paul Coulson plans record $1.8bn Ardagh investment
10 Goldman Sachs to pay record $2.3bn foreign bribery penalty in the US
Real news has value SUBSCRIBE