US economists win Nobel prize for work on climate change 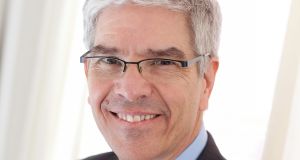 Paul M Romer who, along with William D Nordhaus, has won the Nobel Prize for including long-term thinking on climate issues and technological innovation in economic research

William D Nordhaus of Yale University and Paul M Romer of New York University’s Stern School of Business have been awarded the 2018 Nobel Prize in Economics for including long-term thinking on climate issues and technological innovation in economic research.

The two Americans “have designed methods for addressing some of our time’s most basic and pressing questions about how we create long-term sustained and sustainable economic growth”, the Royal Swedish Academy said on Monday.

Nordhaus (77) began working on environmental issues in the early 1970s and has been trying to measure the economic costs of global warming ever since. In the 1990s, he became the first person to create a model that calculates the interplay between the economy and the climate. He warned in a recent paper that it’s “unlikely” that nations can achieve the 2 degree target outlined in the Paris Agreement and that the “carbon price needed to achieve current targets has risen over time as policies have been delayed”.

The 62-year-old Romer, who this year stepped down from his post as chief economist at the World Bank after a rocky term, has argued that policymakers should stop trying to fine-tune the business cycle and instead promote new technology. His work published in 1990 has served as the foundation for what’s called “endogenous growth theory”, a rich area of research into the regulations and policies that encourage new ideas and long-term prosperity.

“Both their methods and the core questions they are addressing in the research are of the utmost importance to human welfare,” said Jakob Svensson, professor of economics and director of the Institute for International Economic Studies at Stockholm University.

“I would hope that policy makers and politicians would use their findings to think about long-run global issues.”

This year’s laureates were announced as the United Nations issued a stark warning on the growing threat of climate change, adding pressure on policy makers and business leaders to do more to address the risks. It also comes a little over a year after US president Donald Trump dragged the world’s biggest economy out of the Paris climate accord. The Swedish academy said that Nordhaus and Romer “do not deliver conclusive answers, but their findings have brought us considerably closer to answering the question of how we can achieve sustained and sustainable global economic growth”.

Annual prizes for achievements in physics, chemistry, medicine, peace and literature were established in the will of Alfred Nobel, the Swedish inventor of dynamite, who died in 1896. The prize in economic sciences was added by Sweden’s central bank in 1968.

Born in Albuquerque, New Mexico in 1941, Nordhaus did his undergraduate work at Yale and earned a doctorate in economics from the Massachusetts Institute of Technology in Cambridge in 1967. He returned to Yale to teach that year and has been at the New Haven, Connecticut-based university since, except for a two-year stint as a member of President Jimmy Carter’s Council of Economic Advisers from 1977 to 1979. He is also the co-author of a popular economics textbook with the late Paul Samuelson, who won the Nobel Prize in economics in 1970.

Romer is a native of Denver whose father is Roy Romer, a former governor of Colorado. He earned a bachelor’s degree in mathematics from the University of Chicago. After doing graduate work at MIT and Queens University, he received a doctorate in economics from the University of Chicago in 1983. At Chicago, Romer studied under 1995 Nobel Prize-winner Robert Lucas, who was influenced by the free-market theories of Milton Friedman. Even so, he dismissed the university’s long-held precept that markets always produce efficient results, arguing that competition isn’t perfect and sometimes needs help.

Romer has been a long-time presence on short lists for the Nobel, and was even mistakenly announced as a winner by NYU in 2016. But in recent years his attacks on economic models have irritated many of his colleagues. In a paper based on a 2016 January lecture he declared, “For more than three decades, macroeconomics has gone backwards” by abandoning a commitment to objective facts in favour of models. The “dismissal of fact goes so far beyond post-modern irony that it deserves its own label. I suggest ‘post-real’,” he said. – Bloomberg