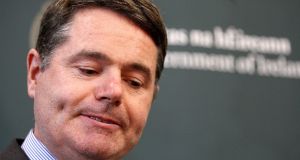 Minister for Finance Paschal Donohoe. The Government is likely to use an unexpected €1 billion in corporation tax receipts this year to help with the health budget. Photograph: Donall Farmer

Most Irish taxpayers don’t trust the Government to spend public money wisely, according to a survey by tax refund specialists Taxback.com.

The group surveyed more than 1,600 of their customers to ascertain their confidence in Government spending of taxes.

It found that while the majority support the Government’s planned spending on infrastructure projects, 72 per cent are less trusting of the Government’s ability to spend public money wisely.

The finding comes ahead of Tuesday’s budget which is expected to earmark €300 million for tax cuts and about €3.3 billion for spending increases.

The programme for government suggested a 2:1 ratio in favour of spending increases over tax cuts. In Budget 2019 the ration will be about 11:1 amid the public outcry over blockages in housing and health.

The survey suggested a majority of taxpayers (54 per cent) also favoured introducing a third rate of tax of 43 per cent on earnings above €80,000 in the budget. Such a rate could yield the exchequer an additional €433 million for the Government.

Commenting on the findings, Eileen Devereux, commercial director at www.taxback.com, said: “Taoiseach Leo Varadkar has said he wants the majority of any additional cash to go into improving public infrastructure rather than tax reduction, so may well be pleased to hear that 52 per cent of our survey respondents also favour this approach.

“However, it also means that a sizeable 48 per cent will be left disappointed on budget day as they would rather see a reduction in taxes, and with the prospect of a general election looming, the Government will be hoping to get this portion of the population on side ahead of polling day.”

The budget is also expected to include a significant increase in the level of capital spending for social housing.

1 Irish company paid €1.2m a year by collapsed Blumenthal-linked Australian restaurant
2 Should AIB compensate me for upsetting letter on arrears?
3 Legal eagles yet to land; economy to grow 3.4% this year; and CEOs on social media
4 Irish economy to grow by 3.4% this year, predicts EY
5 ‘I wouldn’t be a big saver. I tend to buy now and repent at leisure!’
6 Hugo MacNeill steps back from Goldman Sachs role
7 Why bosses should not be afraid of speaking out on Instagram
8 Poll on second election, concerns over Irish pension gap, and Ireland’s rich list
9 Tax shifts won’t drive multinationals out of Ireland - Moody’s
10 Chris Johns: The Johnson administration will spend, and needs a quiet Treasury
Real news has value SUBSCRIBE