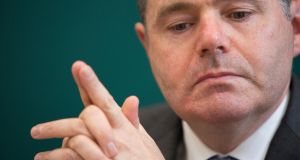 Minister for Finance Paschal Donohoe. The Government is opposed to proposals from the European Commission for a digital services tax. Photograph: Tom Honan

Ireland has stepped up its campaign against digital tax proposals from the European Commission in a joint submission with three other states, warning that the proposals breach international treaty obligations.

Ireland, the Czech Republic, Finland and Sweden say the proposed digital services tax (DST), which the Austrian EU presidency and the French hope to have approved by December, creates double taxation issues that would contravene bilateral taxation treaties between member states and third countries.

Several major digital companies have already warned that the proposals will see them taxed twice on the same revenue.

The presidency has promised that the issue will be discussed on October 26th at an expert meeting .

The four say the digital tax would also contravene standards agreed in an OECD “Inclusive Framework on BEPS” agreed by more than 115 countries and jurisdictions on the implementation of the OECD/G20 Base Erosion and Profit Shifting package.

“Given the potentially far-reaching political, economic and legal consequences of introducing a tax at EU level that is not in line with tax treaties,” the joint submission says. “It is our view that a discussion is needed on the compatibility of the DST with international obligations, especially member states’ tax treaties with third countries.”

Ireland remains one of the few states resolutely opposed to the digital tax, which is being proposed as an interim measure ahead of OECD-level proposals that are expected in the spring. Ireland argues that EU-only measures would damage European competitiveness and may exacerbate trade tensions with the US at a difficult time.

The Commission’s digital tax proposals, issued in March, involve an interim 3 per cent tax on gross revenues or turnover rather than profits.

It would apply to companies with total annual worldwide revenues of €750million or more, and that have annual EU taxable revenues of €50 million.

The tax would be applied on revenue made from user-targeted advertising on a company’s interface, transmissions from data collected, and social networking that could lead to the supply of goods or services.

To avoid companies from being taxed twice on the same income, the allocation of taxing rights between two states is laid down in bilateral double tax treaties. These treaties set out the rules of “where to tax”, or how much of corporate income is allocated to a country.

The Commission claims that digital tax “does not breach any double tax treaties with third countries or WTO rules” and insists “companies will be able to deduct the tax as a cost from their corporate tax base, alleviating the risk of being taxed twice on the same income”.

That would be some comfort for companies but not for member states which act as the home to major digital companies, and would see their tax take on repatriated profits reduced.

If the Commission fails to gets its digital tax directive through, many member states have pledged to introduce unilateral measures to raise money from digital companies activities on their territories. The Commission warns that such an eventuality would lead to the risk of complexity and confusion as the rules are likely to differ in each country.