Latest figures put the headline rate at 14.7 per cent in September 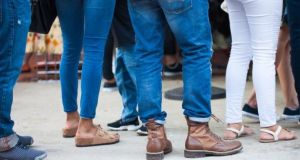 When those on the Covid-19 payments are excluded, the CSO said the unemployment rate rose to 5.4 per cent in September from 5.2 per cent in August.

The State’s jobless rate fell to 14.7 per cent at the end of September from 15.3 per cent a month earlier.

The decline was only marginal and less than what had been expected with new restrictions to curb the spread of coronavirus in Dublin and Donegal hitting the hospitality sector for a second time.

The accompanying restrictions on restaurants and bars has triggered a rise in the number of people claiming the Pandemic Unemployment Payment (PUP).

Unemployment hit a pandemic peak of 28 per cent in April but has fallen in the interim, albeit at a slower rate in August and September.

The latest figures from the Central Statistics Office (CSO) are an estimate based on the Live Register and Covid-19-related claims and indicate that as many as 342,769 people were unemployed in September.

The total includes those claiming PUP.

When those on the Covid-19 payments are excluded, the CSO said the unemployment rate rose to 5.4 per cent in September, up from 5.2 per cent in August.

Breaking the results down by broad age group, the traditional monthly unemployment rate, which excluding Covid-related claims, for those aged 15 to 24 years was 18.9 per cent in September, while it was 3.8 per cent for those aged 25 to 74 years.

“Ireland’s labour market recovery so far has been impressive, bouncing back quickly from the record high Covid-adjusted unemployment rate of 28.2 per ent we saw in April, but there’s still a long way to go,” Jack Kennedy from recruitment website Indeed said.

“ While the continued decline is a welcome sign, the Covid adjusted rate still stands at 14.7 per cent, almost 10 percentage points higher than the standard rate this time last year,” Mr Kennedy said.

“As the economy is now officially in recession, the upcoming Budget will be pivotal in determining how the labour market recovers. As with previous downturns, the impacts can be unevenly felt and threaten to deepen the divide across sectors, regions and age groups.”

“We are seeing a K-shaped recovery whereby those in better financial positions are less impacted than those less well off,” he said.

A separate study published by the CSO on the theme of flexibility at work but pertaining to 2019 before the pandemic found that employers here were most likely to decide when staff started and finished work (64.8 per cent).

This is slightly higher than the European Union average of 60.8 per cent.

The research also revealed that employers here were more likely to decide when a woman started, and finished work compared to setting a man’s work schedule (70.6 per cent versus 59.9 per cent) and while the same trend was observed in the EU27, the gender gap was much smaller than for Ireland.

Just under one-in-five (17.3 per cent) employees here were able to fully decide the start and end of their working day, it found, which is slightly lower than the corresponding figure for the EU27 (18.1 per cent).