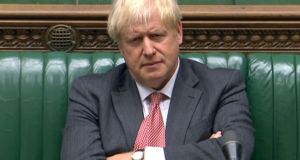 Image of the week: Johnson’s battering

Monday was not the best of days, image-wise, for UK prime minister Boris Johnson. Even for a Monday, it was bad. Johnson wound up on the receiving end of a skewer fashioned by none other than Ed Miliband, the erstwhile Labour leader who David Cameron once notoriously warned would bring “chaos” if he was elected.

With the current Labour leader Keir Starmer in self-isolation, it fell to Miliband to point out that the latest prevaricating over the Brexit withdrawal deal was a bit rich given it was “his deal, it’s his mess, it’s his failure”. Miliband then picked a gaping hole in the UK’s international law-breaking internal market Bill, saying it did precisely nothing to deal with the “supposed threat” of an EU blockade on food coming into Northern Ireland from Britain, even if such a threat existed, which it doesn’t.

He then invited Johnson to show the House of Commons the part of the Bill that would help. Johnson, weakly shaking his head while keeping his arms folded, had never looked so embarrassingly abject.

188 million Followers that Kim Kardashian West, of Keeping Up with the Kardashians fame, has on Facebook-owned Instagram, the influencer’s platform of choice.

24 Hours for which Kardashian West and other celebrities “froze” their Instagram and Facebook accounts on Wednesday as part of the Stop Hate for Profit movement that campaigns against the spread of hate, propaganda and misinformation on the platforms. “I can’t sit by and stay silent,” she said, announcing her plan to stay silent.

33 Percentage gain in Facebook’s share price from the start of the year until Tuesday night. The social media giant was also in the news this week after a whistleblower, Sophie Zhang, said executives ignored or were slow to react to her warnings about election-swaying disinformation around the world.

Getting to know: Jane Fraser

Jane Fraser will be the next chief executive of Citigroup – in February, she will become not only the first woman to lead Citi, but the first to head up a major US bank. In senior roles at Citi for 16 years and lately the heir apparent to outgoing CEO Michael Corbat, Fraser was born in St Andrews in Scotland, educated in Cambridge and Harvard and began her career at Goldman Sachs.

Her husband, Alberto Piedra, quit his job as head of global banking at European bank Dresdner Kleinwort a decade ago to spend more time with their two children and help support Fraser’s career. “We said one of us has to stop for the family . . . and he said ‘okay, I want to go, I’ll be the one, I’ll go and do something different,” was how she described the couple’s decision. In 2018, she denied having one eye on the Citi top job, but wisely added that this might change “over time”. With Citi dealing with the economic fallout of the pandemic, the timing, alas, has a whiff of the “glass cliff” about it.

Private jet company Private Fly this week released its annual poll of the most scenic airports, a list more poignant in 2020 by virtue of the fact even the most bog-standard landing is now unavailable to the majority. So which runways triumphed?

5. Barra. The remote island beach in the Scottish Outer Hebrides, licensed as an airport in 1936, is a regular on this countdown.

4. Orlando (Melbourne) International Airport. It offers views of Floridian beaches, a river lagoon and, from some angles, the rocket launch pads at the Kennedy Space Centre.

3. Skiathos. The Skiathos (Alexandros Papdiamantis) Airport in Greece will give window-seaters a gleaming view of the Aegean island of Skiathos and its turquoise waters.

1. Donegal. For the third consecutive year, Donegal Airport was voted the most beautiful place to approach from the air. Dublin Airport sent on its congratulations.