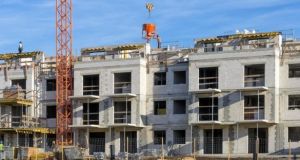 Some 235 government home loans were approved in the first six months of the year at a total value of €38.2million, with 283 loans drawn down at a value of €47.7m

Approvals for the government’s affordable home loan scheme fell by 60 per cent in the first six months of the year on the back of Covid-19 and a move in January to make the scheme more expensive.

New figures from the Department of Housing show that approvals for the Rebuilding Ireland home loan scheme, which was introduced in 2018 to help low-income borrowers get on the housing ladder by undercutting lenders in the market with low-cost mortgages, plummeted by 60 per cent in the first six months of the year as putative low-income home-buyers failed to get a green light for the scheme. Draw downs fell by 50 per cent.

According to the figures, 235 home loans were approved in the first six months of the year at a total value of €38.2 million, with 283 loans drawn down at a value of €47.7 million.

While applications for the scheme are not detailed in the department’s figures it’s likely that fewer people may have applied for the scheme given the impact of the Covid-19 pandemic on incomes, while fewer may also have been approved as a result of this.

However, the decrease in approvals in the first quarter of 2020, before the pandemic hit, was significant at 37 per cent.

This suggests that the Government’s decision to increase the cost of the scheme has also hit potential applicants.

Previously a successful applicant could borrow at a rate of 2 per cent over 25 years, a rate which significantly undercut those available in the market at the time. However, this rose to 2.745 per cent in January of this year, making the loans considerably less affordable, and decreasing the amount potential home-buyers can borrow.

It also pitches the scheme substantially above market rates, with a rate of 1.95 per cent now available from Avant Money over seven years.

One of the most noted declines was seen in Dublin city, where the scheme had been popular. Last year 140 home-buyers were approved for the scheme in the first six months of the year; this year. however, just 56 were.

Fingal, which covers areas like Swords and Castleknock to the north of the city, approved 49 loans in the first half of 2019, but just 19 in 2020.

Dún Laoghaire-Rathdown meanwhile, which encompasses areas like Blackrock and Sandyford in the south, saw just one loan approved in the first six months of the year for €215,400.

In Cork city 49 applicants were approved in the first six months of 2019, but just four this year.