EU hits US with tariffs on €3.4bn of imports 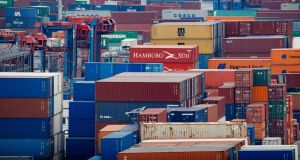 The European Union will impose tariffs on up to €3.4 billion of imports from the United States from Tuesday in retaliation for similar penalties imposed by Washington last year on a range of goods including Irish butter, cheese and liqueurs.

The decision had been building for some time and the bloc was granted the right to impose the tariffs as a counter-measure by the World Trade Organisation last month in a case against plane manufacturer Boeing, part of a long-running dispute between the allies over aviation subsidies.

German economy minister Peter Altmaier acknowledged the timing for finalising the move was not ideal as it came just after the election of Joe Biden, which was seen as a chance by EU governments to reset trade relations with the US that had suffered under the administration of Donald Trump.

“A very large majority of member states have seen the presidential election as an opportunity for us to take a new approach to our trade relationship, and to solve the trade conflicts we have with the United States,” Altmaier told journalists.

“We would have liked to have reached a unanimous decision before the US election, but we remain open for a negotiated settlement now as well.”

The new tariffs on US imports into the EU will include 15 per cent on aircraft and 25 per cent on a range of agricultural and industrial products, a choice the EU said was designed to “strictly” mirror US levies rather than escalate the trade dispute.

EU trade commissioner Valdis Dombrovskis added that the EU would be ready to drop the tariffs at any time if the US would drop theirs, and that initial contacts had already been made informally with Biden’s team to discuss trade and other matters.

“We are ready to withdraw or suspend our tariffs any time when the US is ready to do so on their side, whether it be under the current or next US administration.”

As the EU would not know who would be appointed to replace the current US trade representative Robert Lighthizer until February or March next year after Mr Biden takes office, the EU states felt it was not possible to delay the decision to impose the tariffs.

As president, Biden is expected to review the levies put in place on a range of goods from abroad, such as those on European cheese and wine, part of Trump’s ‘America First’ policy aimed at curbing imports and boosting exports to reduce the US trade deficit.

Irish products hit by the 25 per cent tariff on imports into the US last year included Kerrygold, Baileys, and whiskey from Northern Ireland.