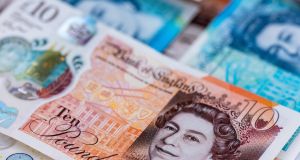 Britain’s economy on course to shrink by 10 per cent in the first half of the year. Photograph: Chris J Ratcliffe/Bloomberg

The UK economy stagnated in the fourth quarter, a roller-coaster period that began with turmoil over Brexit and ended with relief after prime minister Boris Johnson’s landslide election win.

However, hopes that the return of political stability might lay the foundations for a steady recovery have been blown away by the economic fallout from the coronavirus pandemic.

Britain is now facing its steepest slump for a century, with the economy on course to shrink by 10 per cent in the first half of the year, according to Bloomberg Economics.

The UK’s Office for National Statistics figures on Tuesday show gross domestic product was unchanged from the third quarter, unrevised from a previous estimate. The annual growth rate was also unrevised at 1.1 per cent.

The current account deficit, meanwhile, narrowed sharply to £5.6 billion (€6.3 billion) amid a surge in exports, though recent figures have been heavily distorted by flows of non-monetary gold. The gap was the equivalent of 1 per cent of GDP, the smallest since 2011. – Bloomberg

1 Irish company MyBio to sell 10-minute Covid-19 antibody test
2 Angela Merkel sweeps in to save the euro zone
3 Pandemic payment may be tapered based on previous earnings
4 In six months we will be in the grip of a 1980s-style recession
5 Aer Lingus wants quarantine period axed to resume flights in July
6 A million beers await drinkers as Europe's bars reopen
7 Don’t expect a bonanza for Ireland from the EU’s €750bn recovery cash
8 Cycling made easier with an Irish-made electric bike
9 Cairn Homes to sell 61 apartments at former RTÉ lands for social housing
10 Ryanair to process all Covid-19 refunds within 10 weeks, Michael O’Leary says
Real news has value SUBSCRIBE