German economic council believes economy might shrink by 5.4 per cent in 2020 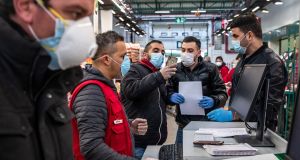 A worker wearing a protective face mask uses a computer at a check-out area at the Mercabarna food wholesale complex in Barcelona, Spain. Photograph: Angel Garcia/Bloomberg

Economic sentiment in the euro area plunged the most on record after the furious spread of the coronavirus forced businesses in vast parts of the region to shut and prospects dwindled that life would return to normal any time soon.

The European Commission reading – following similarly downbeat reports out of the region’s biggest economies – comes at the end of a quarter that saw the outlook for the world and its economy thrown into disarray.

New-year hopes that a calming in trade tensions would allow growth to stabilise have given way to panic in markets about a recession even greater than that experienced after the 2008 financial crisis.

Adding to the gloom, the German government’s council of economic advisers said on Monday that the economy might shrink as much as 5.4 per cent this year if restrictions aren’t lifted in mid-May. Companies big and small are reeling under the pandemic.

Volkswagen’s unprecedented closure of factories in Europe and the Americas is costing the world’s largest carmaker €2 billion a week.

While the manufacturer assured it can cope with the situation for several weeks, many smaller businesses, restaurants and stores may be on the brink of bankruptcy. The commission index slumped to the lowest since mid-2013, with the mood worsening in all sectors, along with the view of future demand and employment.

The collapse was particularly pronounced in services and retail. It might still understate the severity of the crisis because most responses were collected before strict containment measures were enacted. Governments are trying to support the economy with record amounts of stimulus, and France, Italy and Spain have called for pooled euro-area financial resources to stem the cost.

The European Central Bank has already committed to buy more than €1 trillion of debt and granted relief to banks to help them deal with the virus fallout. But with hopes dwindling that the current slump will be short-lived and leaders swearing in their citizens for an extended lockdown, the economy might deteriorate a lot further before it can improve. – Bloomberg