The Irish Times view on Brexit: Delay is almost certain 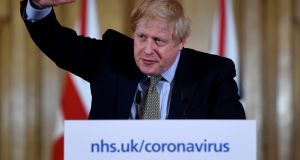 Such is the speed with which coronavirus has hit that the dominant story of 2019 – Brexit – has disappeared from the headlines. However, as of now the UK is due to leave the so-called transition period at the end of this year, which is when it finally departs from the EU trading bloc and a range of other co-operative arrangements. It is the moment craved by the Brexit lobby, when the UK “escapes” from EU rules and the jurisdiction of the EU courts.

It now looks almost certain to be delayed, for two main reasons. The first is that the UK and EU governments will simply not have the time to conduct the necessary talks. Time was already short, but to suggest that any kind of a deal can now be worked out, with governments and public servants facing a massive public health crisis, is crazy.

The second reason is that companies, consumed with the fall-out from the virus, also known as Covid-19, will simply not have the time or money to also cope with the changes which a new trading regime would bring. Whether a deal is done on new trading arrangements or a breakdown leads to a reversion to trading under World Trade Organisation rules, companies would face further cost and disruption. So far Boris Johnson’s government has refused to consider any delay, despite the cancellation of forthcoming EU/UK meetings due to the virus. Under the withdrawal agreement, Johnson must decide by June whether to request a delay, which can be for one or two years. He must surely now do so. Not doing so by the end of June would create yet more uncertainty and risk, at a time when more than enough already exists.

A delay would be welcomed by the Irish Government, also consumed with the virus response. It would also remove the pressure to finalise the new trading arrangements for Northern Ireland, designed to avoid a hard border on the island.

It makes sense now to put the whole process on hold, using the mechanisms in the withdrawal agreement. The concern is that Johnson, under pressure from Brexiteers who fear what a delay might mean for the shape of Brexit, continues to refuse to recognise the obvious.