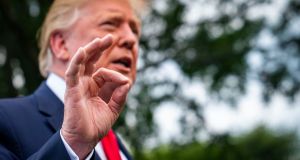 US president Donald Trump said Wednesday night that the country would delay its next planned tariff increase on China by two weeks, as “a gesture of goodwill” that may help to mend the seriously damaged ties between the world’s two biggest economies.

The United States would delay a planned increase in its 25 per cent tariff on $250 billion of Chinese goods from October 1st to October 15th, a move that was made “at the request of the vice premier of China, Liu He, and due to the fact that the People’s Republic of China will be celebrating their 70th Anniversary on October 1st,” the president said in a tweet.

The move comes as trade talks between the United States and China have stagnated, leading to stock market volatility and consternation among businesses that have paid higher prices to import and export goods. Despite months of talks, negotiators still appear far from a comprehensive trade deal that would resolve the Trump administration’s concerns about Chinese economic practices, including its infringement on US intellectual property.

The president’s announcement will delay talks by only two weeks. But it could allow negotiators to meet before the next round of tariffs, raising the potential for that increase to be averted. The two sides were on the cusp of a trade deal this spring, when Chinese leaders decided that some US demands to change their laws infringed too much on Chinese sovereignty. Since then, Mr Trump has moved ahead with taxing an additional $112 billion of Chinese products, and he was expected to raise tariffs even further on October 1st. China imposed additional tariffs on $75 billion worth of US goods in retaliation.

Tensions between the two sides have eased slightly in recent weeks, with Chinese officials agreeing to travel to the United States in October for the next round of talks. On Wednesday, China published a short list of US products that would be exempt from its new tariffs, and said it would announce more exemptions in coming weeks. The exemptions included cancer drugs and certain chemicals that China does not produce domestically, but it did not include US exports like pork and soybeans, which have been targeted by Beijing as punishment for Trump’s tariffs.

In remarks in the oval office on Wednesday, Mr Trump greeted the exemptions as a sign that China would soon compromise, saying that the trade war “was only going to get worse” and “they want to make a deal. “They took tariffs off, certain types,” he said. “I think it was a gesture. It was a big move. People were shocked. I wasn’t shocked.” On other fronts, the Trump administration continues to move ahead with more stringent treatment of China. The administration has drafted an executive order that would increase inspections of mailed packages, in an effort to crack down on shipments of counterfeit goods and deadly drugs from foreign nations including China.

The measure is not aimed specifically at China. But Mr Trump has often accused China of failing to stop shipments of fentanyl from flowing into the United States.

Regarding the trade talks, China and the United States appear to still have substantive differences. Chinese officials have emphasized recent changes they have made to laws governing foreign investment and intellectual property, rather than discussing the more significant changes the Trump administration has demanded.

Mr Trump has ordered US companies out of China and expressed satisfaction at the damage his tariffs are wreaking on its economy. Business leaders said they are already struggling under the tariffs, and predict lower profits and wage cuts if further levies - more are set for December - go into place. – New York Times service

1 In six months we will be in the grip of a 1980s-style recession
2 Angela Merkel sweeps in to save the euro zone
3 Property price drop of up to 12% this year a ‘reasonable’ assumption – McDonagh
4 Donohoe warns of cost of pandemic as budget deficit swells to €6.1 billion in May
5 Avoca wins battle with Monkstown locals over cafe operation
6 Chartered Land moves closer to approval for Dublin’s tallest tower
7 Aer Lingus wants quarantine period axed to resume flights in July
8 Should my mam wait for house prices to drop before buying?
9 Stocktake: Has Warren Buffett lost the magic touch?
10 Brother is dragging his heels as executor of uncle’s will - is there anything I can do?
Real news has value SUBSCRIBE