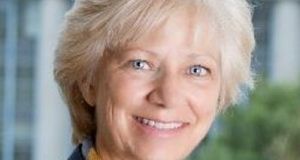 US deputy tax leader at PwC Pam Olson, will speak in Dublin next Tuesday at the 2019 PwC Irish Times Tax Summit

US support makes a global deal on corporate tax at the OECD much more likely, according to Pam Olson, US deputy tax leader at PwC.

With support growing for proposals on a minimum corporate tax rate, a key part of the plan, she says, countries like Ireland may have to point out that there are issues of national sovereignty in setting a tax rate and that any OECD deal should respect this.

The OECD is aiming to reach political agreement on a major reform of global corporate tax by the end of the year under the Base Erosion and Profit Shifting (Beps) programme, with the final technical details to be worked on next year.

Ms Olson, who will speak in Dublin next Tuesday at the 2019 PwC Irish Times Tax Summit, said the US, after its own major tax reform legislation, now saw a global agreement as being in its interests and this had been “very important for the project getting legs and moving forward”.

While she said she was “betting on the OECD to get a deal, given their record so far”, an agreement was still far from guaranteed.

The latest proposals threaten Irish tax policy by seeking to move some taxing rights to major markets, away from countries like Ireland where multinationals have their headquarters. This could mean major multinationals pay less tax here, as they would already be paying some in relation to revenues in major markets served from Irish global headquarters.

Ms Olson believes that any change here is likely to be “modest”, given that the actual value created in major markets is limited.

The other leg of the reform programme, the planned imposition of a minimum tax on corporate profits at a level yet to be specified, could threaten Ireland’s use of the 12.5 per cent tax rate to attract companies here. As a minimum rate was part of the major US tax reform plan passed at the end of 2017, Ms Olson said this “opened the door to the issue at the OECD as once the US had done it, it couldn’t take the position that others should not”.

The shape of the minimum tax plan has still to be agreed with Ms Olson saying it is most likely to apply at headquarters level to companies – in other words to their overall earnings rather than to what they earn in specific locations. Depending on how the talks progress, countries like Ireland, which use a low corporate tax rate to attract foreign direct investment, may have to argue that aspects of the proposal are an “affront to sovereignty”, she said, as countries have traditionally been able to set their own tax rates.

The PwC partner said that, while companies were under pressure to invest more in the US, there was also a general recognition that foreign direct investment in other markets was beneficial, she said, “ even if not all politicians get that”.

With some countries threatening to impose digital sales taxes on a unilateral basis, there was a view in the US that an OECD agreement and moving forward on an agreed basis would be a better approach.