Explainer: Where now for a Brexit deal after the Varadkar-Johnson meeting?

Irish Border and backstop remain central to any breakthrough 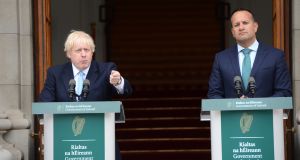 Boris Johnson said in Dublin that he wants to leave the EU with a deal. What would this mean?

Reaching a deal on the Withdrawal Agreement would mean getting sign-off by the EU’s 27 members, the European Parliament, and a majority in the House of Commons. If this happened the UK would leave and a transition period would immediately commence in which not much would change until the end of December 2020 at least, and possibly longer if both sides agreed. This would remove the risk of a damaging no-deal exit.

With difficulty.The key problem is the Irish Border. The UK wants to leave the EU trading bloc and this would require new checks and controls at or near the Border. Checks are needed for customs, to monitor the movement of goods, to make sure tariffs are paid, to control smuggling, and to ensure regulations are adhered to, particularly for animal and food health and safety. Both sides have committed to avoid checks and infrastructure at the Border, though differ on what this commitment means and how it might be achieved.

So this is where the backstop comes in ?

Yes. The backstop is designed to come into effect only if future trade talks between the UK and EU do not reach a deal which in itself avoids the need for border checks. Given the determination of the current UK government to leave the EU single market and customs union, a backstop may well be needed – though who knows what direction UK politics will take over the next couple of years.

The first backstop plan included a commitment that Northern Ireland would remain sufficiently aligned to EU regulations and remain part of the customs union. Because the DUP complained that this would lead to a different regime in the North than elsewhere in the UK, with more checks on goods crossing the Irish Sea from Britain and the North abiding by rules set in Brussels, a second backstop was then agreed. This would have involved the whole of the UK remaining aligned with the EU customs regime, with the North remaining a full member. But this angered the hardline Brexit lobby in London. They complained that it could keep the UK “trapped” in a customs union with the EU, a phrase repeated by Johnson in Dublin .

So this second backstop plan is dead – and talks now look likely to go back in the direction of the original plan.

What will the key issues be ?

If the UK was willing to sign up lock, stock and barrel with the original Northern Ireland-only backstop plan, then that would form the basis of a deal. This would require Johnson to ignore the protests of the DUP. Could he then get this through the House of Commons? This is a key issue that could scupper a deal.

In Dublin, Johnson, did refer to the “economic unity” of Ireland. Such unity – with the same regulations on both sides of the Border – is the only way to keep the Border operating as it does now. But we are not clear exactly what Johnson means.

He repeated the idea of the whole of Ireland being in the same zone for animal and plant safety. This would remove one reason for checks at the Irish Border, as EU rules say that animals and animal food products must be checked at a border inspection post on entry to the single market. In this plan more checks than currently happen would be needed on animals and food entering the North from Britain.

However, border checks and/or controls would be needed for other reasons too – for customs checks, to control smuggling and, in time, to ensure other products met EU standards, if UK rules diverged.

Johnson referred to a variety of other solutions here, for example big companies signing up to be so-called “trusted traders” involving advance notice of truck movements and payment of duties online. Some checks would still be needed, however, and the issues of smaller companies and policing smuggling remain. The authorities also need some way to check and confirm when goods cross the Border if the rules in the North are different from the Republic .

Is a deal possible?

Unless Johnson is willing to accept the Northern Ireland backstop more or less in its entirety, negotiating all the different areas which need to be controlled and checked via separate deals will be very difficult and complex. Ireland will be loath to see the backstop unpicked through any suggestion that the trading regime in the North might diverge form the Republic. This would mean, inevitably, that the border would not operate as it does now, which is Dublin’s goal.

Two other issues will also come into the mix. One is the commitment on both sides to look for alternative solutions – something the EU has said it will examine but insisting that the backstop will remain while these talks go on.

The second is what say the North’s politicians could have in the whole process. Originally the UK suggested that it would seek input for the executive and assembly – currently suspended – through a variety of measures, allowing it to have an input before a decision was made to trigger the backstop, to have a say in new rules being applied in the North, and also some representation on a EU/UK joint committee which will oversee the arrangement.

The key issue for Dublin here is not to have any arrangement which could lead to some block on the backstop coming into force or, more likely, any confusion about whether the North would follow new regulations coming from Brussels. However, if the talks do get going, this issue of a democratic input from the North will be a central topic.