Analysis: Message the Government wants to send out is this may be difficult for Ireland but it is manageable 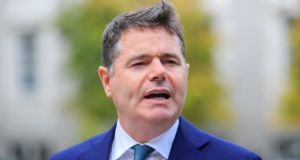 With the UK’s move to Brexit lurching from one crisis to the next, the Government has predictably decided to draw up the Budget for 2020 on the basis of a disorderly no-deal scenario. This may not happen – and if it does it could be either at the end of October or the end of January. But Minister for Finance Paschal Donohoe says he cannot take the risk of drawing up a budget on the basis that a no-deal might be avoided. If he did take this approach – and a no-deal Brexit did transpire – then the risk would be having to reverse course mid-year with targets being missed, and the risk of an emergency budget.

This means plans that various ministers have had in their lockers for popular measures ahead of a likely general election next year will have to stay there. There will be no cut in the income tax burden and probably no significant rises for key target groups like pensioners.

Above all, the message the Government wants to send out is that this may be difficult for Ireland, but it is manageable. Speaking on Wednesday the Minister said that a no-deal scenario could see economic growth here fall to 0 to 1 per cent next year, compared to 3 per cent plus otherwise. This would not be a recession, but it would feel very different to the strong growth of recent years. And while the Minister said he wants to provide “certainty” for businesses and consumers, the reality is that significant uncertainty is likely if there is a crash-out Brexit, at least for a period.

Much of the Budget gaps remain to be filled in, but a few things are clear. Personal tax changes will be minimal – and with many people getting wage increases this means the tax burden on incomes will edge up. Spending changes, above and beyond those already pencilled in, will also be limited. Here we should remember that there is already €2.1 billion committed to higher spending next year, including €900 million in additional capital spending, wage increases and other measures. The Minister will try to stick to all these, but scope for anything more will be limited.

There will still be some changes in tax and spending. The Minister has around €700 million leeway for these – and will probably create a bit more by raising additional revenues. But the cash benefit to taxpayers will be small and additional spending measures limited, with some – at least – directed towards mitigating the impact of Brexit.

It is not yet clear how the numbers will break down. Remember that the Minister has already said that he will let the budget go from an expected surplus into deficit next year if there is a no-deal Brexit. Part of this reflects the hit to economic growth and the knock-on impact on spending and tax revenues. But some also relates to special measures which will be needed to help sectors worst hit, such as the beef industry, for example.

Significant work lies ahead for the Government in finalising these measures and getting state-aid clearance from Brussels. The European Commission has signalled willingness to help, via quick consideration of such measures and some cash supports. But negotiation will be needed on how this works as only businesses with a likelihood of survival are meant to get support and even then it will be temporary. Whatever the Government does, job losses and closures will result from a no-deal exit and a period of significant uncertainty will affect confidence.

The Minister, as he must, said that he was confident Ireland could come through a no-deal scenario and that the hit would be nothing like what occurred during the financial crisis. However GDP growth of less than 1 per cent next year, a big hit to some sectors and upheaval across the rural economy in particular will still be a big reversal from recent strong growth rates. And the political problem for the Government is that when things go wrong, whoever is in power takes a popularity hit.