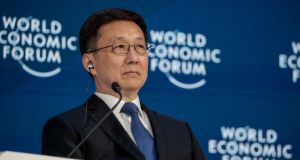 Chinese vice-premier Han Zheng launched a strong defence of globalisation and sought to ease concerns about China’s economy as he spoke to delegates at the World Economic Forum conference in Davos on Tuesday.

“Unilateral and protectionist policies, which run counter to the global trend, will lead nowhere,” Mr Han said, echoing remarks by Chinese leader Xi Jinping when he delivered a landmark address to the WEF three years’ ago.

“China will open its doors still wider to the world, despite the protectionist and unilateral moves by some countries,” he added, without naming any individual nation.

The comments come days after Beijing agreed a phase-one trade deal with Donald Trump’s administration last week. The deal takes steps to root out intellectual property theft and forced technology transfers in exchange for Washington dropping or reducing many of the tariffs on Chinese goods imported into the US.

However, trickier parts of the long-standing dispute between both countries, such as subsidies for Chinese state-owned companies, have been deferred to phase-two negotiations.

Meanwhile, Chinese telecoms equipment giant Huawei’s founder, Ren Zhengfei, insisted at a separate WEF event on Tuesday that, while the US may escalate its campaign against the company, the impact “would not be very significant”.

The US has been at the forefront of a global campaign against the telecoms equipment company, saying its technology could allow its spy on customers for the Chinese government. Washington placed Huawei on a trade blacklist last year, citing national security concerns. Huawei denies the allegations.

Mr Ren, whose daughter Meng Wanzhou, Huawei’s chief financial officer, is currently fighting extradition from Canada to the US, said the company has spent a significant amount of money on a “plan B”, which has allowed the company to survive.

“That’s why we withstood the first round of attack,” he said.

Meanwhile, Mr Han said in his special address that the Chinese economy, which grew at a rate of 6.1 per cent last year, the slowest rate in three decades, “is in a transition from high-speed growth to high-quality development”.

He added the economy “is in a pivotal period of redefining structure and growth drivers” but that the commitment for “sound and steady progress for the long-run remains unchanged”.

“The Chinese economy has enormous resilience, potential and latitude,” he said. “We have every confidence in realising high-quality development.”

1 Eason acquires rival Dubray Books for undisclosed sum
2 Solar panels: Are they worth the investment?
3 Bank leaked my loan request to family who tried to rip me off
4 Fuel company loses €1.3m challenge over tax bill
5 When the Chemistry no longer works – the closing of a leading Irish ad agency
6 Can I see my father’s previous wills?
7 Ryanair and Aer Lingus monitor impact of coronavirus on travel to Italy
8 Dalata considers European expansion as revenue, earnings rise strongly in 2019
9 Stock markets tumble into the red for second straight day
10 Up to 5,000 engineering jobs expected to be created in 2020
Real news has value SUBSCRIBE