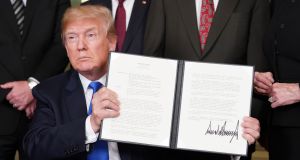 Last March US president Donald Trump signed trade sanctions against China. US treasury secretary Steven Mnuchin confirmed on Sunday that Washington and Beijing had agreed to back off from imposing tariffs on each other.

Beijing’s special trade envoy Liu He said China and the United States had reached consensus on economic and trade issues, and would not engage in a trade war, although there was no mention of a $200 billion (€167 billion) target the White House had proposed earlier.

“There was a consensus on taking effective measures to substantially reduce the United States’ trade deficit in goods with China,” the two countries said in a joint statement.

“To meet the growing consumption needs of the Chinese people and the need for high-quality economic development, China will significantly increase purchases of United States goods and services,” the communique said.

Under the terms of the deal, China will import more energy and agricultural commodities from the US to narrow the $335 billion (€284 billion) annual US goods and services trade deficit with China.

The communique did not mention what would happen to the threatened tariffs introduced by both sides in the run-up to the talks.

US president Donald Trump has threatened tariffs of up to $150 billion (€127 billion) on Chinese imports to punish China for long-standing complaints about intellectual property theft, forced technology transfer and various trade barriers which work against US interests.

He made cutting the US trade deficit with China a promise in his presidential campaign.

China responded with the threat to retaliate with tariffs on US imports including soybeans, aircraft, cars, whiskey and chemicals.

Vice-premier Liu, a close ally of president Xi Jinping, said in an interview with China Daily that the talks had been “quite successful, very meaningful and very fruitful” and the two sides had agreed not to launch a trade war and to stop imposing tariffs on each other.

China was reportedly considering a package that relied on major purchases of US liquefied natural gas, including a contract for a US firm to build LNG receiving and processing facilities in China.

The deal would also involve new commitments on intellectual property protections and could be agreed by a potential mid-year visit to Washington by Chinese vice-president Wang Qishan.

He said Washington and Beijing would now examine the areas where they had reached consensus and had already established working groups for consultations, including on agriculture.

“Maybe some ministers from the US government will lead the groups to Beijing and will meet our colleagues to have deeper discussions with us and try to make concrete deals,” he said.

A commentary in the China Daily said the deal “demonstrates the vast potential of the world’s two largest economies, which are largely complementary in nature, to expand win-win co-operation instead of resorting to tit-for-tat trade retaliation.”