Latest official numbers show value of exports fell by 5% to €10.4bn in March 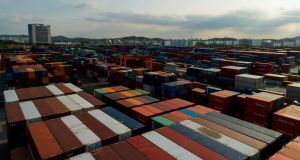 The value of Irish exports fell by 5 per cent to €10.4 billion in March while imports declined by 9 per cent to €6.3 billion, according to the latest trade numbers from the Central Statistics Office (CSO).

This resulted in a trade surplus for the month of just over €4 billion, up marginally on the previous month.

While the monthly trade numbers can be volatile, the underlying trend remains positive with the value of exports for the first quarter of 2018 put at €33.5 billion, up 4 per cent on the corresponding period last year.

The main drivers of the monthly figures were exports of electrical machinery, apparatus and appliances, which fell by €515 million (55 per cent) to €426 million in March on an annual basis. Exports of other transport equipment, including aircraft also decreased by €675 million (76 per cent) to €218 million .

In contrast, exports of organic chemicals increased by just over €1 billion (52 per cent ) to €3 billion

The Republic’s trade with the UK has so far been largely unaffected by Brexit with exports and imports remaining steady.

However, the latest numbers show exports to Britain fell €63 million or 5 per cent to €1.1 billion in March.

This was largely due to a decrease in machinery and transport equipment with a smaller decrease in minerals fuels, lubricants and related materials, the CSO said, while noting there was a small increase in the exports of food and live animals.

Overall the EU accounted for €5.8 billion (52 per cent ) of total Irish goods exports in March, of which €1.7 billion went to Belgium and €867 million went to Germany.

Antwerp in Belgium is one of the largest global drug redistribution hubs and receives most of the State’s pharma exports which are not destined for the United States.

The US was the main non-EU destination, accounting for €3.1 billion (28 per cent) of total exports in March.

The value of goods imports since the start of the year was nearly €20 billion, which represented an increase of €712 million (4 per cent) compared with the first three months of 2017.

This was driven by mineral fuels imports, which increased by €52 million (13 per cent) to €463 million in March. The majority of this increase was in the imports of gas, perhaps reflecting the very cold weather experienced in March, the CSO said.

Imports of other transport equipment, including aircraft, meanwhile decreased by €291 million (16 per cent) to just under €1.5 billion.