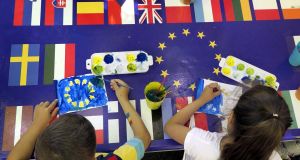 Romania wants to reach 70 per cent of the euro region’s average gross domestic product per capita by 2020, up from about 60 per cent now. Photograph: Robert Ghement/EPA

The three poorest European Union countries now have euro adoption in their crosshairs.

The latest is Romania, which said last week that it would present its strategy by the end of the year, rekindling an idea it shelved in 2015. It joins Bulgaria and Croatia in seeking a path to joining the currency bloc.

Doing so may help the Balkan nations stay close to the EU core as questions arise over the future distribution of crucial development funds.

“After Brexit, being outside the euro area might make you an outlier,” said Juraj Kotian, a Vienna-based economist at Erste Group Bank. “If you look at the prepared EU budget you’ll see there’s much more emphasis on the euro area. The European Commission wants to have this convergence facility for joining the euro, so countries need to take advantage of that.”

The three countries’ plans contrast with richer parts of the continent’s ex-communist east. While Slovenia, Slovakia and the Baltic nations of Estonia, Latvia and Lithuania all use the euro, Poland, the Czech Republic and Hungary have no firm plans to follow suit.

Greece’s experience of what can happen when independent monetary policy is surrendered hasn’t helped. But for the EU’s least affluent members, development funds may be needed for years to come as they seek to bridge the wealth divide.

Bulgaria’s preparations are the furthest advanced. The EU’s poorest nation, which holds the bloc’s rotating presidency, has already pegged the lev to the euro and wants to join the exchange-rate mechanism – the precursor to adoption – this summer. Croatia plans to switch to the single currency in five to seven years, while Romania – the most-populous of the three with 20 million people – has yet to reveal its new target date.

Romania wants to reach 70 per cent of the euro region’s average gross domestic product per capita by 2020, up from about 60 per cent now, according to the latest convergence programme approved on Thursday. “Setting a concrete euro-adoption date requires first an in-depth analysis, especially of the real, structural and institutional convergence,” the government said.

How their bids will be received is unclear. While Bulgaria meets the criteria and the German and French leaders have backed it, the European Central Bank is less keen following a spate of financial scandals in eastern Europe. Croatia and Romania have weaker economic cases.

A summit on the future of the EU after Brexit, to be held next spring in Romania, may shed some light on their prospects. – Bloomberg

8 Covid to hit housing, pay to remain flat and a very Irish hybrid