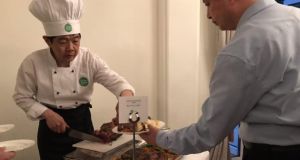 Irish beef is served in Irish Embassy in Beijing: Ireland’s agri-food exports to China have increased fivefold from about €200 million in 2010 to approximately €1 billion in 2017.

Irish beef could expand its access to the China market, Minister for Agriculture, Food and Marine Michael Creed has said as analysts told a trade mission there was huge potential for Irish produce in the giant market.

Mr Creed met Zou Zhiwi, vice-minister of the General Administration of Customs, China (GACC) and senior agency officials, in Beijing, and he raised the prospect of adding to the beef products permitted for export to China.

“Having established beef access to the Chinese market in recent weeks, I raised the prospect of adding boned-in beef and chilled beef to the list of permissible products for export to China,” the Minister said.

China is proving to be a rich market for Irish exporters. Ireland’s agri-food exports to China have increased roughly fivefold from about €200 million in 2010 to approximately €1 billion last year.

“I also discussed the progress of a protocol between Customs China and the department for the exportation of breeding swine to China as well as the potential development of an e-certification system which would allow for greater clarity in terms of goods being exported as well as being a robust anti-fraud measure,” he said.

The Minister was in Shanghai where he was due to attend Asia’s largest food exhibition, SIAL China. Irish beef exporters will have a stand there this year promoting Irish beef to Chinese trade buyers.

SIAL China is an enormous event. Last year, it received 101,134 visitors with more than 3,200 exhibitors taking part, making it second only to the SIAL network’s Paris exhibition.

Over 3,400 exhibitors from 70 countries are expected to take part in the fair, which will occupy 13 halls at the Shanghai New International Expo Centre.

The Minister attended a seminar to coach Irish firms keen to do business in China, which included the launch of Bord Bia’s meat strategy for the Chinese market.

“This new study has given us and the industry a clear view of how beef moves within China and has helped us understand the options open to the Irish beef industry,” said Tara McCarthy, Bord Bia chief executive.

The report is aimed at providing market insight for Irish exporters to help prepare the industry for beef access. Bord Bia also surveyed 5,000 Chinese consumers, identifying in and out of home beef consumption habits, shopping habits, and cut and country preferences.

The event was attended by a large delegation of Irish farmers and representatives from the agri-business sector.

“We think beef consumption would rise if there was more beef available. We don’t think there is enough beef surplus to supply what China’s demand could be,” said Richard Herzfelder, a consultant and senior adviser to the meat, fish and dairy consultants GIRA.