German growth starts 2018 at weakest pace in a year 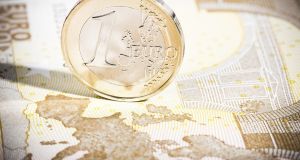 Germany’s economy grew at the weakest pace in more than a year at the start of 2018, part of a slowdown across the euro area that the European Central Bank says may prove temporary.

A similar deceleration has been recorded in the euro zone, with growth cooling to 0.4 per cent from 0.7 per cent.

The slowdown in Europe’s biggest economy is further confirmation that the region had a sluggish start to the year, a development already apparent in business surveys and other indicators. Yet ECB officials have dismissed it as a combination of factors such as a flu epidemic and colder weather and expect it to dissipate in the course of the year.

Still, threats ranging from trade tensions to higher oil prices and market volatility could act as a brake. Olli Rehn, the deputy governor of the Bank of Finland, said Monday that risks to the medium-term outlook “seem to be tilted on the downside”. The International Monetary Fund will update its view of Europe’s economy later on Tuesday.

The Bundesbank also remains optimistic, saying that record orders should boost German output in the coming months. Just last week, Siemens raised its outlook for full-year earnings, and HeidelbergCement said the economic upswing will boost construction activity in its major markets after a long winter held back first-quarter results.

In the euro area, Slovakia, the Netherlands and Portugal will also publish their first-quarter GDP data on Tuesday, while Eurostat’s second estimate for the 19-nation euro zone is due at 11 a.m. Frankfurt time. The ZEW institute will release its latest investor expectations index at the same time. – Bloomberg