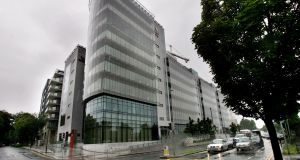 The parent firm of mobile phone operator Three is the buyer of Heuston South Quarter, the head office of telecoms rival Eir, reports the Sunday Times. The property arm of CK Hutchison Holdings purchase the development for €176 million in an off-market transaction earlier this year.

A Central Bank report into the systemic risks of a hard Brexit has identified four risks to the Republic’s financial services sector. It warns that insurance operations may not pay out on claims as European operators would lose the right to conduct business in the UK, and likewise UK firms would not be able to do business here. It also identifies the risk that traders in derivatives and the like may lose access to British central counterparty clearing houses. The other two risks, outlined in a report in the Sunday Business Post, are the loss of “passporting services” for financial funded management firms and potential differences on data protection rules.

Economist Colm McCarthy warns, in his Sunday Independent column, that we should heed masters of the “dismal science” who urge benefits of prudence. He argues that bother Central Bank governor Philip Lane and Seamus Coffey of the Fiscal Advisory Council have advocated the need for prudence, and they should be heeded.

A battle for control of the company behind the Fulfil protein bars is close to settlement, reports the Sunday Times. The firm’s founders, Tom Gannon and Niall McGrath, own 50 per cent of the fill, but took court action this year after they were removed from running the business. The other shareholder is Barry Connolly, owner of Richmond Marketing. The paper reports that mediation talks are close to agreeing a deal for Gannon and McGrath to be bought out.

Ahead of its full-year results on Wednesday, Marks and Spencer is bracing for a potential relegation from the FTSE 100 index, the Sunday Telegraph reports. The retailer is expected to report a second straight year of falling profits and a meagre one per cent rise in revenues, according to the paper.

A sharp fall in valuations at peer companies has emerged as the biggest threat to the planned IPL Plastics IPO, reports the Sunday Independent. It reports an industry source who says the IPO is still expected to go ahead, but the performance of peer companies PRC and Berry is likely to mean the company brings forward a lower price range to market than would otherwise be the case.

Crisis-hit UK bank TSB is likely to take a £60 million hit from a recent IT fiasco that has still left some customers unable to access certain accounts. The Sunday Telegraph reports that the cost of the IT mess is fuelling speculation about the future of the bank’s chief executive Paul Pester.