Surging euro must be monitored for its impact on prices – Lagarde 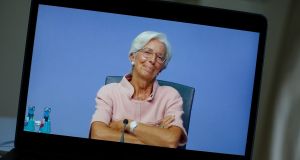 European Central Bank president Christine Lagarde said the surging euro must be monitored for its impact on prices, but she didn’t signal any pressing need to adjust monetary policy. The currency jumped to the highest in more than a week.

Speaking after the ECB kept its pandemic bond-buying programme unchanged at €1.35 trillion and the deposit rate at -0.5 per cent, Ms Lagarde said officials will “carefully assess incoming information, including developments in the exchange rate, with regard to its implications for the medium-term inflation outlook”.

Bloomberg earlier reported that the governing council agreed to adopt a weaker phrasing about the euro’s appreciation than it did during the last bout of gains.

The single currency was up 0.7 per cent at $1.1881 by late afternoon, close to the two-year high it reached when it climbed above $1.20 last week. Against sterling the euro was trading at 92.3p.

A stronger currency weakens inflation by cutting the cost of imports, and undermines output by making exports less competitive. In January 2018, after the euro had risen to about $1.24, then-president Mario Draghi said that volatility in the exchange rate “represents a source of uncertainty” that needs to be monitored.

“Clearly to the extent that the appreciation of the euro puts negative pressure on prices, we have to monitor carefully such a matter, and this was extensively discussed,” Ms Lagarde said, while repeatedly stressing that the ECB doesn’t target a particular exchange rate.

“The ECB today engaged in an interesting, possibly risky, verbal balancing act,” said Carsten Brzeski, chief economist at ING Germany. The central bank “seems to be concerned about the stronger euro but not too concerned just yet. At least not everyone at the Governing Council”.

Ms Lagarde also revealed new projections, showing policy makers now expect the economy to contract by 8 per cent this year – slightly less bleak than its outlook three months ago – before rebounding by 5 per cent in 2021. – Bloomberg

1 Air travel never going ‘back to way it was’
2 Should I switch bank now with Ulster Bank at risk of closing?
3 Will brother’s widow get half of our parents’ estate when they die?
4 ‘Tax war’ will hit Ireland if digital tax talks fail, OECD says
5 A look at Elon Musk’s track record ahead of Tesla’s ‘battery day’
6 Electronic benefit transfers put food stamps out of date
7 What agriculture can learn from Charles Darwin
8 Tourism and aviation players demand von der Leyen end EU travel chaos
9 Thinking time: Why it should be essential in every workplace
10 Disney activist fights for change
Real news has value SUBSCRIBE