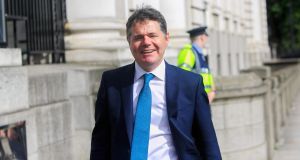 Minister for Finance Paschal Donohoe said the next phase of banking union was so important “because that is how we unlock new sources of capital for all members to fund more job creation”. Photograph: Collins

Minister for Finance Paschal Donohoe will urge euro-area finance ministers to use the Covid-19 crisis as an opportunity to complete European Union banking union and free up capital for pandemic-hit European economies.

Mr Donohoe is in Berlin for his first meeting as head of the Eurogroup at which he plans to sound out all members on their priorities during his 2½-year term.

In this time euro finance ministers’ shared priority at present – using budgets and borrowing to contain the worst effects of pandemic – will eventually yield to debate in the currency union on balancing public-health priorities with sustainable public finances.

“Eventually we are going to have to make a decision regarding at what point we get the trade-off right between maintaining economic support and moving back to national finances that are sustainable and credible,” Mr Donohoe told The Irish Times.

He said the recent €750 billion rescue package had marked a new departure for the EU on shared debt, less as a far-reaching paradigm shift but a “policy framework change for now”.

“We will evolve back to the concept of countries running either declining deficits, balanced budgets or sustainable surpluses when public health and external circumstances merit it and justify,” he said.

Assessing whether that point has come – given diverging virus development across the continent – may prove to be the most delicate balancing act of his time as European head.

Time is of the essence, too, in his other priority: pushing ahead with completing the so-called banking union.

It arose as a response to the euro crisis a decade ago, and two of the three pillars envisaged then are now operational in the single currency bloc: joint mechanisms to supervise banks and, if necessary, wind them up.

Agreement on the third pillar remains elusive as the issues involved – including how to deal with non-performing loans and a common euro-area deposit insurance scheme – are political hot potatoes.

But Mr Donohoe suggests the economic shocks of Covid-19, including record unemployment, have “changed the context, both politically and economically” for further progress on an integrated euro banking system.

“The next phase of banking union is so important because that is how we unlock new sources of capital for all members to fund more job creation,” he said.

Having Irish MEP Mairead McGuinness as new commissioner for financial stability, pending EU parliamentary approval, was a “positive development” on this front, he said, given her “huge experience” and knowledge of EU institutions.

Striking the balance inside the euro area – between public health and economic needs – mirrors similar looming decisions at national level.

With many moving targets in the budget planning phase, Mr Donohoe is confident the National Public Health Emergency Team and acting chief medical officer Dr Ronan Glynn are aware of the knock-on effects of their public-health recommendations, on mental health and the economic health of the country.

“It is the role of government to look at how we can integrate public-health advice with what is right and sustainable for the country,” he said. “That is why I and the Government are working in the context of our plan for living with Covid.”

In an interview with the Süddeutsche Zeitung, Mr Donohoe said the first half of 2021 would be crucial in seeing whether a global deal was possible on a digital taxation of tech companies with EU headquarters in Ireland such as Apple, Facebook and Google.

1 Air travel never going ‘back to way it was’
2 Will brother’s widow get half of our parents’ estate when they die?
3 Should I switch bank now with Ulster Bank at risk of closing?
4 ‘Tax war’ will hit Ireland if digital tax talks fail, OECD says
5 Dunboyne residential opportunity guiding at €6.75m
6 Pallet manufacturer looks to imports as timber crisis takes root
7 Irish insurers in focus as UK cracks down on dual pricing
8 Tourism and aviation players demand von der Leyen end EU travel chaos
9 Thinking time: Why it should be essential in every workplace
10 Tánaiste urges businesses to brace for Brexit with 100 days to go
Real news has value SUBSCRIBE