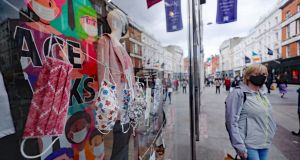 The imposition of restrictions to suppress coronavirus has curtailed consumer activity and turned inflation into deflation. Photograph: PA Wire

Consumer prices were on average 1 per cent lower in August compared with the same month last year as the cost of communications, transport, clothing and footwear all fell.

In inflation terms, this constituted a 10-year low and marks a change from a year ago when average prices were rising at an annual rate of just over 1 per cent.

But economists have questioned the validity of the latest numbers with so much of the retail sector effectively closed on account of the pandemic.

The latest consumer price index (CPI) from the Central Statistics Office (CSO) suggests the most notable changes in the year were decreases in communications, which includes phone charges (-8.4 per cent), transport (-4.4 per cent), clothing and footwear (-3.2 per cent) and household furnishings and equipment (-2.4 per cent).

Falling oil prices contributed to a fall in the cost of transport. Within this category, diesel and petrol prices were both down about 4 per cent in annual terms.

The divisions which caused the largest downward contribution to the CPI in the year were transport and housing, water, electricity, gas and other fuels, and communications.

Conversely, there were increases in the cost of education (+4.1 per cent), health (+3.5 per cent) and alcoholic beverages and tobacco (+2.9 per cent).