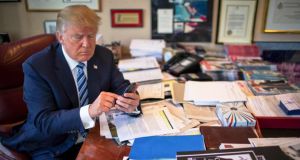 United States president-elect Donald Trump has chosen Jay Clayton, a partner at Wall Street law firm Sullivan & Cromwell in New York, to be the next head of the Securities and Exchange Commission (SEC), emphasising his plans to cut federal regulations to spur job growth.

“Jay Clayton is a highly talented expert on many aspects of financial and regulatory law, and he will ensure our financial institutions can thrive and create jobs while playing by the rules at the same time,” Mr Trump said on Wednesday.

“We need to undo many regulations which have stifled investment in American businesses, and restore oversight of the financial industry in a way that does not harm American workers.”

Mr Clayton, who would become the latest in a long line of Wall Street veterans to join the new administration, worked on Alibaba’s initial public offering in 2014 and includes Goldman Sachs among his clients. An experienced mergers and acquisitions counsellor, he has no previous government experience.

Reaction to his selection broke along predictable lines. Jacob Frenkel of Dickinson Wright in Washington, who represents companies in commission proceedings, applauded the nomination. “The decision to choose a non-enforcement-centric person is the best possible decision for the capital markets. Nothing in the agency’s legislative history identifies it as a law-enforcement agency,” said Mr Frenkel, a former SEC lawyer. “It is a civil regulator with its mission expressly including capital formation.”

Dennis Kelleher, president of the non-partisan group Better Markets, added that “while Mr Clayton may be an excellent lawyer representing Goldman Sachs and Wall Street’s too-big-to-fail banks, America’s families need to know that he will represent them as zealously.” – (Copyright The Financial Times Limited 2017)