Martin Wolf: We are now in the year of living dangerously

War, inflation and financial crisis are the three horsemen of the apocalypse 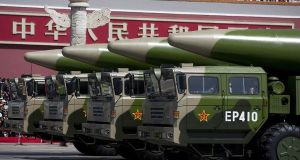 Increasing friction between China and the US is a worry for 2017.

What is going to happen to the world economy this year? Much the most plausible answer is that it is going to grow. As I argued in a column published at this time last year, the most astonishing fact about the world economy is that it has grown in every year since the early 1950s. In 2017 it is virtually certain to grow again, possibly faster than in 2016, as former BBC chairman Gavyn Davies has argued persuasively. So what might go wrong?

The presumption of economic growth is arguably the most important feature of the modern world. But consistent growth is a relatively recent phenomenon. Global output shrank in a fifth of all years between 1900 and 1947. One of the policy achievements since the second world war has been to make growth more stable.

This is partly because the world has avoided blunders on the scale of the two world wars and the Great Depression. It is also, as the American economist Hyman Minsky argued, because of active management of the monetary system, greater willingness to run fiscal deficits during recessions and the increased size of government spending relative to economic output.

Behind the tendency towards economic growth lie two powerful forces: innovation at the frontier of the world economy, particularly in the US, and catch-up by laggard economies. The two are linked: the more the frontier economies innovate, the greater the room for catch-up.

Take the most potent example of the past 40 years, China. On the (possibly exaggerated) official numbers, gross domestic product per head rose 23-fold between 1978 and 2015.

Yet so poor had China been at the beginning of this colossal expansion that its average GDP per head was only a quarter of US levels in 2015.

Indeed, it was only half that of Portugal. Catch-up growth remains possible for China. India has still greater room: its GDP per head was about a 10th of US levels in 2015.

The first three were the result of oil price shocks, triggered by wars in the Middle East, and Federal Reserve disinflation. The last was the Great Recession after 2008’s financial crisis.

This is also consistent with the pattern since 1900. Three sorts of shocks seem to destabilise the world economy: significant wars; inflation shocks; and financial crises. When asking what might create large downside risks for global economic growth, one has to assess tail risks of this nature. Many fall into the category of known unknowns.

For some years, analysts have convinced themselves that quantitative easing is sure to end up in hyperinflation. They are wrong. But a huge fiscal boost in the US, combined with pressure on the Fed not to tighten monetary policy, might generate inflation in the medium term and a disinflationary shock later still. But such a result of Trumponomics will not occur in 2017.

If we consider the possibility of globally significant financial crises, two possibilities stand out: the break-up of the euro zone and a crisis in China. Neither is inconceivable. Yet neither seems likely. The will to sustain the euro zone remains substantial. The Chinese government possesses the levers it needs to prevent a true financial meltdown. The risks in the euro zone and China are unquestionably real, but also small.

A third set of risks is geopolitical. Last year I referred to the possibility of Brexit and “election of a bellicose ignoramus” to the US presidency. Both have come to pass. The implications of the latter remain unknown.

It is all too easy to list further geopolitical risks: severe political stresses on the EU, perhaps including the election of Marine Le Pen to the French presidency and renewed inflows of refugees; Russian president Vladimir Putin’s revanchism; the coming friction between Mr Trump’s aggrieved US and Xi Jinping’s ascendant China; friction between Iran and Saudi Arabia; possible overthrow of the Saudi royal family; and the threat of jihadi warfare.

Not to be forgotten is the risk of nuclear war: just look at North Korea’s sabre-rattling, the unresolved conflict between India and Pakistan and threats by Mr Putin.

In 2016, political risk did not have much effect on economic outcomes. This year, political actions might do so. An obvious danger is a trade war between the US and China, though the short-term economic effects may be smaller than many might suppose: the risk is longer term, instead.

The implications of the fact that the most powerful political figure in the world will have little interest in whether what he says is true are unknowable. All we do know is that we will all be living dangerously.

An important longer-run possibility is that the underlying economic engine is running out of steam. Catch-up still has great potential. But economic dynamism has declined in the core. One indicator is falling productivity growth. Another is ultra-low real interest rates.

Mr Trump promises a resurgence of US trend growth. This is unlikely, particularly if he follows a protectionist course. Nevertheless, the concern should be less over what happens this year and more over whether the advance of the frontier of innovation has durably slowed, as economist Robert Gordon argues.

A good guess then is that the world economy will grow at between 3 and 4 per cent this year (at PPP). It is an even better guess that emerging economies, led yet again by Asia, will continue to grow faster than the advanced economies. There are substantial tail risks to such outcomes. There is also a good chance that the rate of innovation in the most advanced economies has slowed durably. Happy New Year.

1 How safe is it to go back to the office?
2 Elderly parents living in property you own will save you on capital gains tax
3 Construction workers among first PTSB borrowers off payment breaks
4 More than 40% of help-to-buy recipients already had deposit
5 Owner of Dundrum Town Centre to sell prized assets
6 Regeneron says its antibody cocktail prevents and treats Covid-19 in animals
7 Most workers now expect choice to work from home part-time
8 Help-to-Buy bonus; a taste for working from home; and two landmark deals
9 Can a first-time buyer get relief on a buy-to-let home?
10 Don’t invest in an ETF until you understand the tax
Real news has value SUBSCRIBE