Staff at Tyrone exporter advised to apply for Irish passports 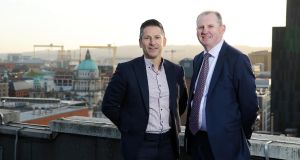 A Tyrone exporter that employs 500 people has asked eligible staff to apply for Irish passports as part of its Brexit planning.

Brendan McGurgan, group managing director of Cookstown-headquartered CDE Global, said the passport advice was just one aspect of the company’s preparations for the UK leaving the EU.

CDE Global manufactures wet processing equipment for a wide range of industries including the mining, sand and aggregates and environmental sectors. Its workforce stretches from Europe to Australia and the Middle East and from Africa to Russia.

Mr McGurgan told a group of Northern Ireland business leaders at a Chartered Institute of Management Accountants (CIMA) business briefing in Belfast on Thursday that as well as encouraging CDE staff to take Irish passports, the group has also been considering how it might avoid shipping and transporting its products through England after next March. In addition, it has been examining the impact any new tariff arrangements might have on its long-term future.

He said that during the countdown to Brexit the Tyrone company was reviewing its entire supply chain because of supplier difficulties it could face after next year. Like many companies in the North and throughout the UK, said Mr McGurgan, CDE is planning to ensure that it has a “buffer stock” in place in case Brexit brings delays in importing crucial materials or any parts.

In the meantime, he said, the Tyrone company is intent on making sure weaker sterling works to its advantage by going after more export sales. Mr McGurgan said CDE is on target to grow its turnover to £100 million this year.

Founded by entrepreneur Tony Convery in 1992 in Cookstown, the group recently opened a new North American headquarters in Texas and has just taken over Caterpillar’s former 300,000sq ft factory in Monkstown outside Belfast as part of a new expansion project.

1 Opioid executive admits to ‘no morals’ ahead of prison term
2 Volvo warns of scaled back car line-up if UK splits from EU rules
3 Who are Ireland’s 17 billionaires?
4 NI house builder apologises to Harry and Meghan over adverts
5 Little strategic thinking in election manifestos of Fine Gael and Fianna Fáil
6 Are there annual limits on inheritances or gifts to a child?
7 CPL founders Anne Heraty and Paul Carroll in line for €1m dividend payout
8 US threatens retaliation against EU over proposed carbon tax
9 Cathay Pacific to resume Dublin-Hong Kong flights in March
10 South Dublin Credit Union members urged to borrow more to ensure survival
Real news has value SUBSCRIBE