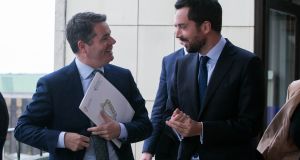 Minister for Finance Paschal Donohoe and Minister for Housing, Planning & Local Government Eoghan Murphy at the launch of the establishment of the Land Development Agency. Photograph: Gareth Chaney/Collins

And making policy tweaks “here and there”, as the Government was doing, simply generated windfall profits for certain developers while diverting resourcing into specific areas, often with unintended consequences.

Addressing the annual conference of the Dublin Economics Workshop in Co Wexford on Saturday, Ms Hegarty said the Government’s policy to promote more student housing, for instance, had merely “hiked up” site values, making it too expensive to build traditional apartments, which had resulted in more lopsided development.

She also claimed that relaxing height restrictions for city centre developments, seen by many as key to addressing demand in Dublin and other urban areas, would not necessarily lead to more apartments, noting the high-rise parts of other cities, such as Sydney, were populated with office blocks and hotels, and not residential units.

“There is an international machine that is in the business of residential development now, that has rolled into lots of cities, Dublin included, that is targeting the niche, high-yield product,”Ms Hegarty said. “And that is affecting the market, the land market hugely, and policy change around that is making the crisis worse.

By any measure, she said the housing crisis had got worse in the two years since the Government launched its landmark housing strategy, Rebuilding Ireland.

“So we have to question why that has happened and not persist with more tweaks and more niche solutions.”

Also addressing the conference was the Department of Housing’s Niall Cussen, who was instrumental in setting up the Government’s new Land Development Agency (LDA), which will be in charge of unlocking State-owned sites for residential development.

Initially up to 10,000 homes are planned on sites such as the 35-acre Central Mental Hospital in Dublin’s Dundrum suburb, he said, while the long-term goal is to facilitate the construction of 150,000 units.

Mr Cussen said the agency’s primary task would be co-ordinating appropriate State lands for regeneration and development as well as opening up key sites which are not being used effectively.

He said when the State faced similar housing crises in the past, huge social housing developments were built, often with negative consequences.

“We’re looking for a much more sophisticated housing delivery approach and strategy now,” he said, noting there would be a greater focus on reusing sites that are derelict.

He said the agency, which had an initial endowment of €1.25 billion, represented a major change in the Government’s involvement in the housing market.

The department, he said, would like to see a more ambitious approach by local authorities when it came to implementing the vacant site levy, which, he said, had the potential to be a game-changer.