Some businesses say they have ‘scaled back or postponed’ spending 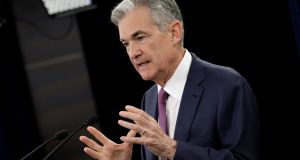 The US Federal Reserve has detected rising concern among US business about the potentially harmful impact of tariffs as growing trade tensions prompt some executives to freeze investment plans.

According to minutes of the Fed’s June meeting, some businesses indicated they had already “scaled back or postponed” plans for capital spending due to “uncertainty over trade policy”, while a larger group voiced concern about the impact of trade restrictions on future investment.

The minutes were released on Thursday, a day before the US is due to start imposing tariffs on $34 billion (€29 billion) of imports from China on Friday, with Beijing set to target an equal amount as a nascent trade war between the two largest economies takes centre stage in an escalating series of disputes.

Trade worries are not, however, eclipsing more positive news about the US economy. At the meeting on June 12th-13th, Fed officials lifted interest rates by a quarter point to a 1.75-2 per cent range and signalled that two more increases are likely in 2018 as they gave a bullish assessment of the US economy.

With growth and job creation accelerating, the minutes said incoming data suggested GDP growth had strengthened in the second quarter as consumer spending picked up after slowing down earlier in the year.

Overall, Fed officials said indicators were consistent with a “strong economy” evolving roughly as they had expected. But they noted pinch points as some businesses said supply constraints for labour and infrastructure were limiting expansion plans – alongside trade worries.

Fed officials also discussed the trade tensions stirred by President Donald Trump in their May meeting, but the minutes of that gathering said they viewed the range of possible trade impacts as “particularly wide”.

The concerns documented in the June meeting appeared more pronounced and the minutes put a greater emphasis on potential negative effects.

“[Business contacts] in the steel and aluminium industries expected higher prices as a result of the tariffs on these products but had not planned any new investments to increase capacity,” the June minutes said.

“Conditions in the agricultural sector reportedly improved somewhat, but contacts were concerned about the effect of potentially higher tariffs on their exports.” – Copyright The Financial Times Limited 2018