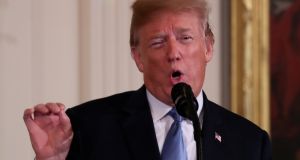 Donald Trump’s administration on Friday imposed new tariffs on $34bn of annual imports from China as the US president threatened to extend levies to all $500bn of goods imported from the country, the biggest shot so far in the trade war between the world’s two largest economies.

Mr Trump’s comments during a visit to the state of Montana — coming only hours before US customs officials began collecting 25 per cent tariffs on 818 different Chinese products from midnight Washington time on Thursday — highlighted the escalating economic consequences of the trade fight between the US and China.

China’s ministry of commerce confirmed that the latest tariffs had come into effect. “This act is typical trade bullying,” the ministry said on its website. “It seriously jeopardises the global industrial chain...hinders the pace of global economic recovery, triggers global market turmoil and will affect more innocent multinational companies, general companies and consumers.” It added that the tariffs would also harm the interests of American businesses and people.

The China Daily, a state-run English language newspaper, called the Trump administration “a gang of hoodlums with its shakedown of other countries, particularly China”.

The US president reiterated plans for a further $16 billion in trade to be targeted in the coming weeks and for far larger actions beyond that. He also repeated a warning that the US had plans “in abeyance” for a further $200 billion in Chinese imports should China retaliate against the new US tariffs — something Beijing is expected to do within hours of the new tariffs taking effect on Friday.

An alarmed American Chamber of Commerce in Beijing said its members were opposed to the trade war, as executives braced for Chinese retaliatory action including inspections, audits and shipment delays. “While our 900 member companies continue to suffer from not having a level playing field in China, they are still extremely clear: increased tensions in the US-China economic relationship will negatively impact their operations in China,” Amcham chairman William Zarit said.

Mr Trump’s comments on Thursday came after the US Federal Reserve released minutes of its previous policy meeting showing that businesses were already putting capital investment plans on hold as a result of the uncertainty caused by Mr Trump’s trade policies.

The latest threats from the president also amounted to a blunt outline of his plans for an escalating trade war against China that business groups and farmers have warned would have further negative consequences for the US economy.

“It is now indubitable that [president]Trump’s threats of tariffs need to be taken both literally and seriously by US trading partners,” said Eswar Prasad, a Cornell University economist and China expert. “The two largest economies in the world are careening towards an open and ugly trade war that might prove difficult to contain or find an exit path from.”

Both Washington and Beijing said they had no plans to back down, with China’s President Xi Jinping last month warning that Beijing would “hit back” at US tariffs.

“This time they will certainly strike back,” said Tu Xinquan, a trade expert at the University of International Business and Economics in Beijing. “There will be no retreat.”

Friday’s batch of US tariffs target products ranging from electric vehicles to industrial lathes and other components and machinery used by US manufacturers. In retaliation, China has promised to target US farm and energy exports such as politically sensitive soyabeans and crude oil.

US business and agricultural groups have warned that they will bear the brunt of any trade war with China as well as those that Mr Trump has launched with neighbours in North America and allies such as Japan and the EU by hitting them with steel tariffs and provoking retaliation. About $75bn in tariffs against US goods has been announced by other countries so far.

“The evidence of pain from a now multi-front trade war is multiplying every day,” said Brian Kuehl, executive director of Farmers for Free Trade, a lobby group. “From China cancelling soyabean orders, to cheese exports to Mexico plummeting, to farm equipment prices rising, the stories of financial loss are now rolling in from farms across America.”

Many US companies are also expecting China to shift business to their competitors in Europe or Asia, in a pointed reminder that, as Mr Xi said last month. “when one door closes, another opens”. The combination of new tariffs on American cars with China’s rollback of normal import duties will for instance make cars imported from the US significantly more expensive than their German or Japanese rivals. - Financial Times